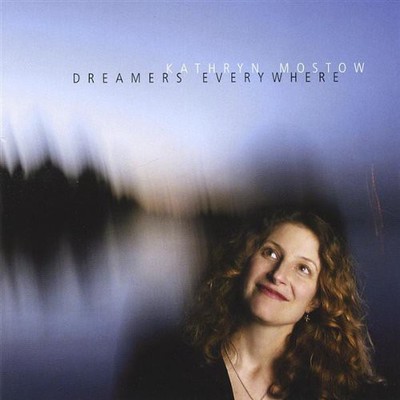 'All of the ten songs on Dreamers Everywhere ride the crest of Mostow's voice, which easily places her among the best Seattle has these days...The result is first class.' Frank Gutch, JR., FAME A Finalist in the 2005 Rocky Mountain Folks Festival Songwriter Showcase Competition, Kathryn Mostow's intimate songwriting and performing has steadily gained the attention of critics and fans alike. Often compared to such artists as Eva Cassidy, Joan Baez, and Dar Williams, Kathryn's songs speak of hope, faith and desire despite the cynicism of our times. With "a voice like a bell, pure and clear" (Indie-music.com), Kathryn has been described as a "whole-body/whole-being singer...who gives out everything she is through her voice" (Bill Fisher, Victory Review). Kathryn's second release, Dreamers Everywhere, features noted jazz pianist/organist Wayne Horvitz, cellist Jami Sieber, dobro and pedal steel player Dan Tyack, fiddler Paul Elliot and bassist Garey Shelton. The 10 songs weave Latin, blues, folk and a capella traditions into a decidedly more roots-based and acoustic album. Dreamers Everywhere has been featured on NPR's All Songs Considered Open Mic website, and was highlighted in the Winter 2005 issue of Sing Out! Magazine. "Kathryn's songs are little nuggets of contentment, offered in a conversational tone, rich with authenticity and simple charm." Kevan Breitinger, Indie-Music.com.

Here's what you say about
Kathryn Mostow - Dreamers Everywhere.