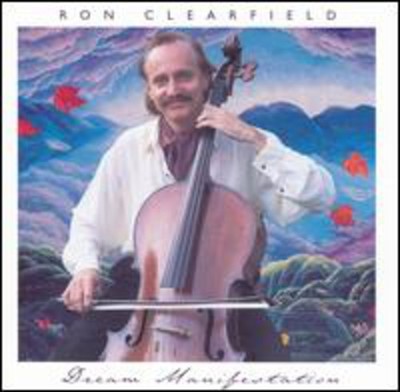 Dream Manifestation offers a musical vision of peace and inspiration. Cellist and keyboardist Ron Clearfield is joined by other instrumentalists on flute, oboe, English and French horn, harp and percussion, creating beautiful and uplifting melodies that fulfill the heart. Combining music of the New Age along with classical elements, this music breathes an expression of tenderness, passion, healing and relaxation. "Dream Manifestation: Directing and driving these sound journeys, keyboardist and cellist, Ron Clearfield weaves immensely lush and abundant new age landscapes joined by instrumentalists on flute, oboe, English and French horn, harp and percussion to produce image-rich tapestries overflowing with color, light and dreamy vibes. With the haunting and plaintive voice of the his cello supported by strings and synth and conversing with the other instrumental voices, the songs on Dream Manifestation evoke restful states where one can almost feel the increase in alpha waves and a slowed heartbeat. Great for meditation and general relaxation, this is a recommended pick." Tamara Turner, CD Baby "Dream Manifestation is an engaging work of tenderness and beauty that both relaxes and inspires the listener." BackRoads/Heartbeats Ron Clearfield: Cellist/Composer/Conductor 21 Clearwater Creek Road Leicester, NC 28748 (828) 683-4425 [email protected] An accomplished cellist, composer and conductor, Ron Clearfield graduated Summa Cum Laude with Bachelors and Masters degrees from the New England Conservatory of Music studying with Brazilian cellist Aldo Parisot and string pedagogues Joseph Silverstein and Leon Barzan. Ron attended the Berkshire Music Festival (Tanglewood) as a fellowship student for two consecutive summers. Ron Clearfield comes from a lineage of gifted musicians. His father was a professional clarinetist who performed with major orchestras through out the United States and Ron's grandfather, originally from Russia, was a fine pianist and teacher. Ron performs on a beautifully restored cello made in 1696. As a cellist, Ron Clearfield was previously a member of the Indianapolis Symphony, the Miami Philharmonic and the Miami Opera Orchestra. He has performed with such pop notables as George Benson, Judy Collins, Linda Ronstadt and Dionne Warwick as well as with classical luminaries Leonard Bernstein, Erich Leinsdorf, Aaron Copland and Seiji Ozawa. Ron was featured on national TV as solo cellist for the A&E Judy Collins Christmas Special at the Biltmore Estate. Just recently, Mr. Clearfield recorded on the Grammy Award nominated CD Rare Bird Alert with Steve Martin and Paul McCartney. As a composer, he has released four critically acclaimed recordings on the EverSound record label: Dream Manifestation, Time on Earth, Music in the Silence and most recently The Healing Muse. He was recently interviewed on Public Radio International on a special program featuring his music and has toured the United States performing his music on a national Borders Books tour. He has scored for numerous television and film projects including: Homeward Journey, aired on PBS and the film Opening Doors Within, awarded first prize at the Fort Lauderdale Film Festival. As a conductor, Ron Clearfield studied conducting with Leon Barzan while at the New England Conservatory of Music and continued his studies with Robert Hart Baker, Joseph Eger and Daniel Meyer. He served as Associate Conductor with the Miami Beach Sinfonia from 1980-1988. Ron was the founder and Music Director of the Blue Ridge Orchestra from 1999-2011 and has conducted the Asheville Youth Orchestra since 1994. In 2011 he started the Appalachian Festival Orchestra, an orchestra dedicated to performances for humanitarian benefits and causes.

Here's what you say about
Ron Clearfield - Dream Manifestation.

1) Home
2) Soliloquy
3) Farewell
4) The Return and Dance of Gaia
5) Dream Manifestation
6) Listen... The Earth Is Weeping
7) Marriage of Heaven and Earth