Carol Shreve - Draw Me in 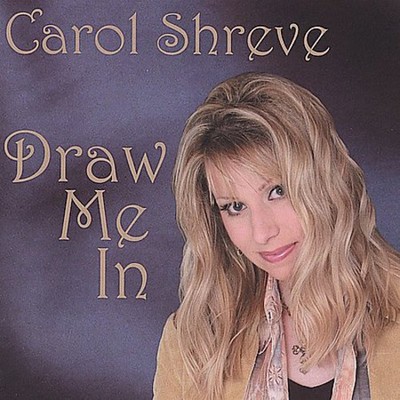 Fresh Anointing * Authentic Praise * Infectious Joy About the Record: 'Draw Me In' is a collection of uplifting and encouraging original tunes produced by Jan Smith (vocal producer for Usher, Rob Thomas, Edwin McCain, India.Arie, Stacie Orrico and many others) and engineered by Huston Singletary (Whitney Huston, Monica, etc.) at Angel Band Studios in Atlanta, GA. About the Artists: "Fresh Anointing. Authentic Praise. Infectious Joy."-That is a perfect description of Gene and Carol Shreve the artists, whose fresh new music is delighting audiences all over the country. "They have something to say, not only musically, but also with their lives," says Margaret Becker, Grammy-nominated & Dove Award-winning Recording Artist and,Producer.- That is a perfect description of Gene and Carol Shreve as people, as parents, and as outspoken advocates for children in need at home and abroad. From righteous and rowdy to vulnerable and intimate, husband and wife team Gene and Carol Shreve perform a mixture of original tunes and popular Christian music while presenting the gospel of Jesus, encouraging the Body of Christ and calling for compassion. Their no-nonsense approach to life, the scriptures and their rib-tickling stories of being the parents of twins quickly bridge the distance between the stage and the audience and draw people into an authentic worship experience. Gene and Carol have had the privilege of sharing with many different audiences in churches from Massachusetts to Arizona to the US Virgin Islands. They have a single mission, which is to share the eternal joy that comes from planting seeds of salvation, empowering Christians to be the hands and feet of Jesus to children in desperate need. Gene and Carol were called into music ministry in 2000. In 2002, they received an additional calling to a partnership with World Vision, the largest evangelical Christian relief, development and child sponsorship organization in the world, as volunteer representatives. World Vision works with the poorest of the poor, bringing food, water, clothing, education and hope to children and their families--all in the name of Jesus! Furthermore, Gene and Carol enjoy working with local organizations to help disadvantaged kids in their own community. So whether it is halfway down the block or halfway around the world, Gene and Carol Shreve Ministries is all about bringing the Good News to poor children and their families! Gene majored in music at Santa Barbara City College in Santa Barbara, CA, before switching to aerospace engineering at Cal Poly San Luis Obispo. Gene also received a master's degree in software engineering from Southern Poly in Marietta, GA. Gene studied hand percussion with Luis Stefanell, a well-respected live performance artist and studio musician in Atlanta, GA. Carol also majored in aerospace engineering (she and Gene actually met at an engineering student paper conference!). She received her bachelor's and master's degrees from the University of Alabama. She completed her engineering education by working briefly on her PhD at Georgia Tech. Carol's vocal performance experience includes extensive solo work throughout her home state of Alabama as a participant in the Miss Alabama Scholarship Organization during college as well as spending a brief period on the solo roster of Valleydale Baptist Church in Hoover, Alabama, after she and Gene married in 1996. Carol trained vocally with Jan Smith, nationally recognized vocal coach and owner of Jan Smith Studios in Atlanta, Georgia. She also studied guitar with Peter Vogl, a highly accomplished teacher, studio musician and live performance artist. Jan and Peter also collaborated on much of Gene and Carol's early original material. Other performance experience includes touring competitively as a member of the brass lines of The Cadets of Bergen County and The Spirit of Atlanta Drum and Bugle Corps. Gene and Carol have been active in the worship ministries at their home churches since they married. These include Valleydale Baptist in Hoover, Alabama, and NorthStar Church in Kennesaw, Georgia. For the past several years, Gene and Carol have assisted local start-up churches to establish their worship teams. These include Lake Pointe Church in Acworth, Georgia, and NorthStar Church in Huntsville, Alabama, where Gene and Carol currently serve as worship leaders. Gene and Carol live in on a small farm in Fayetteville, Tennessee. Gene is currently working in the defense industry. In 2004, Carol left a career in the commercial software industry to concentrate fully on the ministry and to care for Gabriel and Taya, twins born in September 2004. Gene and Carol are animal lovers and enjoy visiting children's homes, hospitals, nursing homes, rehabilitation centers and assisted living centers with their Great Pyrenees, Julius.

Here's what you say about
Carol Shreve - Draw Me in.