Green and Root - Down That Road 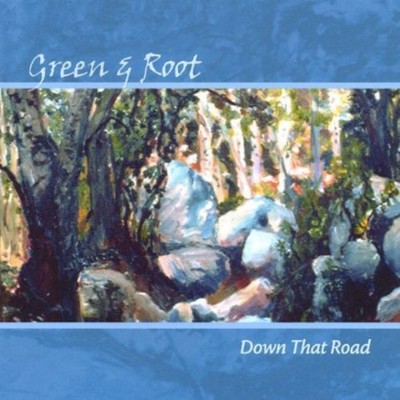 Some recent responses to the album, Down That Road.. 'Exquisite, flawless, top rate stuff. I enjoy this CD more than my current KD Lang CD'. Tony Pierson, San Diego 'I LOVE LOVE LOVE the new record!! It's just gorgeous - on every level' Singer-songwriter Kym Tuvim 'I put Down That Road on in the car and I just started crying! It is so freakin' incredible. I just can't say enough about great your album is! You guys are gonna be giant!' Charlie Cheney - software developer -IndieBand Manager Singer-songwriter Green's debut CD Multiheaded Heart (1999) created a stir in the West Coast music scene with it's folk, blues, world, and pop production wrapped tightly around personal anthems about relationship, nature and love. Tenor Root joins Green on the new CD Down That Road, thus creating Green and Root (because you can't have the green leaves without the roots!) Root's silky harmonies add grace and depth to the album's honest and insightful songs. Down That Road is a storybook of diverse subject matter expressed with delicacy and mastery. The sometimes spare, sometimes full production cradles themes of creativity, marriage, spirituality and death. The album plays earthy and intimate, sometimes quite vulnerable, with an eclectic set of mainly acoustic instruments, including flugal horn, cello, piano, harmonium, accordian, slide guitar, pedal steel, wurlizer, stand up bass and drums. Each song starts with Green's acoustic guitar. Then her illustrious soprano voice enters, sliding up and down the scale effortlessly through the thoughtful and heartbreaking lyrics, with Root's lush harmonies filling out the sound. When conceiving this album, Green and Root wanted to make a CD that spoke about the many things they were concerned about, the things they talked about late at night or on the road, the things that made them crazy. They wanted to make a difference in the world somehow with their music. They strove to move away from songs about love and heartbreak, but the songs that emerged taught them that love and heartbreak are inseparable from the human journey. The new songs only broaden the notion of who we are in relationship with. Now the relationships are not just with a lover, but with oneself, one's mother, the muse, the natural environment, nature spirits, a friend, and a neighbor. Little did they know that in the middle of this project, the most traumatic and difficult thing Green had yet faced in her life would occur; her fit and active mother was diagnosed with and eventually taken by cancer. Through it all they ended up recording two new songs about Green's experience with her Mom's illness and death (Lift My Head and Down That Road). The line 'I'll take my first step down that road' from the title track popped out and seemed to speak for many of the experiences Green and Root have been through and written about in the last few years, such as their experience of 9/11, the march of our country off to war, the steady roar of environmental destruction, and their own personal journeys of healing through grief, as well as through love and marriage. The writing on this album is credited to Green, tho Root's feedback and editing are essential to Green's writing process. Green describes her songs as 'autobiographical pep talks' because 'that's how they feel' (though she steps into the experiences of others sometimes as well). Her songs begin from a questioning place in her mind or a hurting place in her heart. She may not even know what she's going to write about, but through the writing of the song, some sort of reflection presents itself and develops, and a measure of growth and peace ensues. With it's potent blend of fresh and memorable songs of sorrow and hope, Down That Road forges a path that gives us some insight into the struggles and triumphs of our lives. The going is not always easy, and the way not always clear, but take a step we must, down that road.

Here's what you say about
Green and Root - Down That Road.