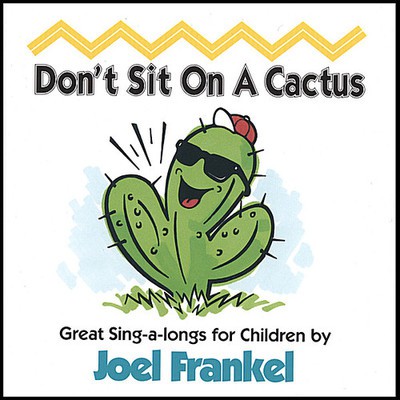 'Don't Sit on a Cactus' is Joel's first CD and still one of the favorites of his young fans. Here is what School Library Journal had to say about it: 'Joel Frankel knows what kind of music children like. In this collection of 11 original songs inspired by traditional folk music, each piece features guitar and plenty of banjo, mandolin and other instruments. Most of the songs are humorous: "Howdy How How" is about "sitting around, wondering how" things grow and change; "Tails" reminds us that all of our animal friends had tails, but we don't; "Hair" is about what's on top of our heads and he hopes "it grows a little bit longer"; "This is How We Talk" features a family of musical instruments. The title song sings of the dangers of sitting on a cactus and offers alternate seating choices. "We Go Together," featured in the hit movie Big, is a gentle songs of friendship and companionship. The tape ends with a lullaby, "Go to Sleep With the Moon," delightfully performed by Irish singer Kathy Cowan. With catchy lyrics and melodies, these songs are sure to entertain children of all ages.' Singer, songwriter and children's entertainer Joel Frankel is a big kid who's been entertaining smaller kids and their parents for nearly two decades. By combining his musical and lyrical talents with his natural gift for teaching, Frankel is consistently creative and stimulating as one of the country's premier artists in the field. Frankel's three other children's albums, 'I Can't Sit Still' and 'JoJo's Barnyard Bash', and 'Ship of Chocolate Chips' have received numerous awards including the Dr. Toy Best Audio award, the Children's Music Web Award, the Parent's Choice Award and the NAPPA Award. Frankel's song 'We Go Together' was featured in the classic motion picture 'Big', starring Tom Hanks. His songs have been on 'The Learning Channel,' an 'NBC-Movie of the Week,' and MTV. Frankel is a member of the venerable Old Town School of Folk Music faculty. His busy performance schedule of over 200 shows each year has included tours of the East and West coasts as well as numerous local appearances at popular festivals and venues such as The Taste of Chicago, Navy Pier, The Jewish Folk Arts Festival, WGN TV, Children's Museums, and many more.

Here's what you say about
Joel Frankel - Don't Sit on a Cactus.