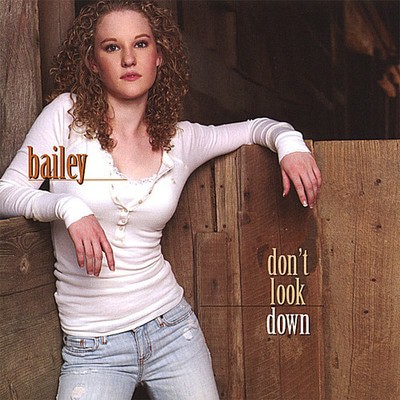 Bailey is a singer/songwriter humbled by her recent success. Bailey remains the same compassionate, and kind hearted country girl that used to sing to her grandpa while sitting in his lap. Country Music fans and radio DJ's as well as Programming Directors all across the Unites States are falling in love with this new country music sensation. Bailey was able to attain distribution success on a large scale without any record label or major music distribution affiliation. She has built a fan base and achieved distribution success on her own with media distribution giants such as Wal-Mart, Sam Goody, Barnes & Noble & Hastings. Her newest self produced album Don't Look Down was released to stores this past June. This new album moved 3,000 units before she even left the studio. This self produced album is packed full of her personal song writing efforts from this past year, but the new single that we think has the strength to be a mega hit in 2006 is Boys-In-Boots and radio DJs are adding it weekly to their rotation lists across the country. It went on to claim a top 15 for her as it peaked at number 13 on The Texas Music Chart. Boys In Cowboy Boots aka Boys In Boots has become the break out tune that Bailey will be remembered by with radio station PDs across the country. Her regional hit success quickly grew to national hit recognition thanks to all the radio DJ's playing it across the country. Thanks also to all of the fans who are requesting it on the radio. Her second release this fall is still climbing the charts and has already claimed a number 28 spot on Music Row's Breakout chart. It has also gone on to claimed a top ten hit recognition plaque as it moved to number 9 on the Texas Music Chart this December. Space has also gone on to claim the number 4 spot on the National Inde Top 30 chart. Then just this week it moved to number 12 on the New Music Weekly Country Chart based of of Los Angeles, California. Current states playing this new single include Arkansas, Arizona, Wyoming, Michigan, Iowa, Georgia, Virginia, New York, Texas, Oklahoma, Kansas, Missouri, Minnesota, Louisiana, Tennessee, Colorado, Kentucky, California, Alabama, Florida, Nebraska, Mississippi, Ohio, New Mexico, Nevada and Indiana... Several others I am sure their are just too many to list. Regardless, it looks like from the success at radio todate Bailey is out for a wild ride as she moves into the new year 2007.

Here's what you say about
Bailey - Don't Look Down.