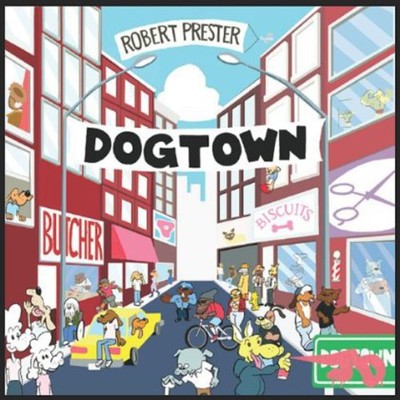 The singular sound you'll hear on Robert Prester's 'Dogtown' is the delightful result of a lifetime's devotion to the piano and to creative composition, years on the bandstand in a variety of contexts, and the coming together of just the right musicians to present his music. It's the 4th recording as a leader by this multi-faceted and well-traveled artist, his first since landing in South Florida several years ago, and if this is your introduction to his work, you're in for a treat.   A gifted pianist from an early age, Prester studied classical piano as a youngster at the Manhattan School of Music, where he would eventually earn a graduate degree in Jazz/Commercial Music, and that classical training is evident in the remarkable fluency and touch he brings to the piano. His love of jazz happened 'almost by accident' in his mid-teens, enrolling in a composition class with a jazz emphasis, and a new world opened up. Private study with Harold Danko and collaborations with drummer Roland Vazquez and guitarist Dean Brown provided early inspiration, and in 1988 his first album, Trillium, was released on the Island Records Antilles label.  That recording of original music for a 10-piece ensemble was followed by two more releases, incorporating elements ranging from Latin to funk and fusion, bop to gospel - a confluence of styles that have always added up to a highly original sound.   The trio at the heart of this session, with Nicky Orta and Ettienne Fuentes, is locked in tight and can turn on a dime. Both Nicky and Ettienne are much in demand on the South Florida scene, and contribute notable solos. Dave Schanzer adds the perfect percussive spice, as well as his masterful engineering, to the project.  The musical palette broadens in a delightful way with the wordless vocals of Terezinha Valois and Jonathan Sigel's trumpet, often in unison and performing some challenging lines with real finesse.  Terezinha and Jonathan both worked in the band of guitarist Phill Fest along with Prester.  You'll find his great piano work, and two originals, on the recent 'Projeto B.F.C.' - the Brazil-Florida Connection - recently released by Phill's group.   Classical music continues to be part of the mix for Prester, who performs with the Cameo Chamber Players, in solo piano concerts, and in duet recitals with his mother (and first piano teacher). And that background is apparent in his intriguingly original writing as well as his playing - note the opening Toy Soldiers, with a nod to Schumann's Soldier's March, and the beautiful solo intro to Realm of Possibility as just two examples - and throughout, you'll hear a sophisticated and seamless blend of composed and improvised elements far different from the typical head-solo-head jazz pattern. The Latin rhythms that have always been a part of Prester's sound turn overtly flamenco on the disc's penultimate track; Noches de Sevilla draws on memories of living for a time above a flamenco studio in Spain years ago. And the trio goes out swinging, on a 'samba-fied' Coltrane classic.  Prester says it's been 'a lifelong challenge to come at Giant Steps from different angles.'   If you're like me, you'll find your own favorite moments each time you revisit 'Dogtown.' As a composer and a pianist, Robert Prester continues to create a sound all his own, and this disc should be a giant step toward wider recognition of his talents. Bob Seymour 'All Night Jazz' WUSF, Tampa  .

Here's what you say about
Robert Prester - Dogtown.