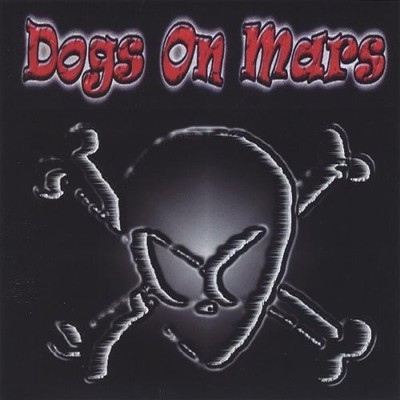 Mars Attacks Dogs on Mars' long-awaited debut mixes bark, bite By Nathan Turk Music Editor of The Syracuse New Times ----- When Dogs on Mars celebrated the release of it's self-titled debut on May 24, it's likely the din spilling into Bleachers' parking lot in Liverpool was rivaled only by the collective, massive sigh of relief among those who have followed the metal quartet for the past year. Winning the Bleachers Bandsearch competition in 2002 certainly erased many a doubt in Salt City music fans' minds about the group's prowess, but in the midst of it's winner's lap into the opening slot of the 2002 K-Rockathon last July the members revealed their woes at not having much to hawk music-wise. 'My brain is a little fried over this K-Rockathon,' guitarist Darin Scott told The New Times the week before the event. 'This past year we wanted to create a buzz and establish ourselves. Now is when we have to capitalize on our success.' Not that bands haven't made out like bandits in the past with only their live shows to represent them. Late-1970s British prog-rockers Random Hold, to cite a legendary example, got signed to Polydor after only one gig. But in the overlooked, and what many people describe as depressed, musical community of Syracuse, it's significant that the crowd packed into Bleachers last week was massive. Scott says it rivaled only that of an Under the Gun gig. And it was treated, fittingly, to a damn near complete run-through of the self-released disc's 11 tunes, including the brand new 'Prey,' a careening ode to desperation that opens with shimmering, reverb-drenched chord comping. The 41/2 minute 'Down' was also knocked out just weeks before the Dogs' session at Liverpool's Village Recorders, and owes as much to 'Monster' Mike Merrifield's guy-on-crack skin pounding as to Scott's spooky atmospherics and Alain Snyder's septic, stabbing bass. A lot of fans were probably wondering where the group had been, since the Saturday show was it's first Syracuse gig in six months. 'We've been playing up in Watertown,' Scott reveals. 'Those people are insane. The only thing they really have up there is cover bands and tribute acts. We played at Spinner's on the base at Fort Drum, and people got so excited they started throwing full bottles of beer on the floor.' So contrary to falling prey to the 'B' word--as in, 'breakup'--as many had assumed, the band was actually honing it's blend of nu-death-groove-grunge metal in upstate New York's musical equivalent of Mr. Miyagi's training grounds. (Bass player Tommy Rose left Dogs on Mars during the last year, however. 'He had other things he had to take care of personally,' Scott says.) And the climate in the 'Cuse for original bands hasn't exactly been the best these past few years. 'All the wishes I had, fall through/ my mind, like drowning in quicksand/ been 14 years I felt so low,' vocalist Gerry Schad snarls in 'Low,' summing up the group's frustration with club owners, landing gigs and the general bullshit they've gone through since forming three years ago. While Scott says the support for original music these past few months is the strongest it's been since the 1980s, the Dogs are steering clear of the Capitol-ism and Arista-cracy bandwagon. The disc is the first for all the members except Scott, whose axe work appeared on former Anthrax vocalist Joey Belladonna's 1995 solo disc. 'For {such} a young band, it's really best to start out independent,' he says. 'Indies have more time, more money than major labels. Let's say you get signed to Arista. When Whitney Houston's CD comes out, you're not going to get any promotion, because all their money lies in pushing Whitney.' This is good news to major-label publicists, who would probably tear their hair out trying to genre-tag the group's sound. Yeah, it's kind of like the hessian/death metal of Shadows Fall, but it's grungier. But not in a Godsmack or Creed kind of way; it's more like Alice in Chains getting tractor-pulled through a Biohazard convention while herds of pack animals sing in cue to Morbid Angel songs and Korn serves hot dogs. 'We haven't found a single person who can pinpoint our sound,' Scott laughs. 'Including us.' Whatever the hell it is, it'll make you feel that same sort of animalism as those future whiplash victims of America that always congregate by the front stage at death metal shows. When the harmonized vocals in 'Rot,' for example, protract to a full-out chorus a minute along, or when the start-stop riffing of 'Pathetic Life' crashes into minor-key waves before rising, falling and crawling effortlessly back into the maelstrom, it's easy to get goosebumps. It's easy, too, to marvel at Pete Walker's mix job, which managed to give the disc the same crunch some groups pay well over a grand to achieve with mastering. The vocals are a bit too loud at points, but hell if that thought ever crosses your mind in a casual listen. The conductor Thomas Beecham once wrote, 'A musicologist is a man who can read music but can't hear it,' meaning it's best to just listen and not hyper-analyze. And he's right. The disc is a mongrel, but rocks like a purebred; listen to it repeatedly, and that's when it's bite really starts to sink in.