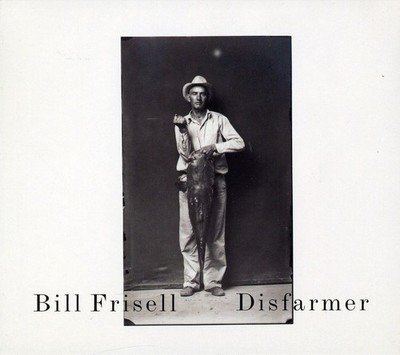 The late Michael Disfarmer was an odd, curmudgeonly character in the rural community of Heber Springs, Arkansas, who, despite his anti-social character, chose to record the stark images of his fellow townspeople, during the 1940s and 1950s, in cheap black-and-white photograph portraits. Decades after the photographers passing, a cache of work made by this solitary and oft-red man was rediscovered, and he has come to be regarded as an important outsider artist. Among the many drawn to his plain yet deeply evocative pictures Chuck Helm, Director of the Performing Arts at the Wexner Center in Columbus, Ohio, who introduced guitarist and composer Bill Frisell to Disfarmers on the hunch that Frisell might be inspired by it. As Helm suspected, Disfarmers work resonated with Frisell and led to the creation of a touring multimedia work, Disfarmer Project featuring Frisell, lap steel guitar player Greg L and violinist Jenny Scheinman, plus slides of Disfarmers photos, displayed on screens. The piece premiered on March 3, 2007, at the Wexner Center, on the campus of Ohio State University. The score was subsequently recorded in Seattle and Nashville produced by Frisells longtime collaborator Lee Townsend and also featuring Viktor Krauss on bas Along with the Frisells original compositions, he interpolates versions of such tunes as Arthur Crudups -That's Alright Mama- and Hank Williams Sr.s -I Can't Help It (If I'm Still in Love with Y- into this subtly yet stunningly beautiful set.

Here's what you say about
Bill Frisell - Disfarmer.