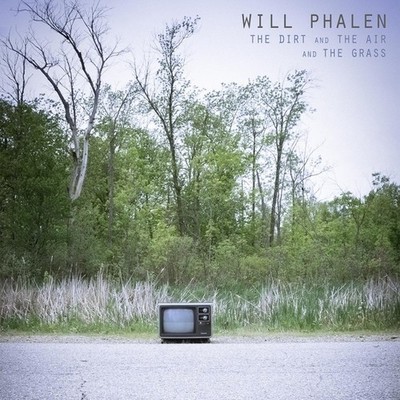 'If you knock on my front door, I'll let you in. If you're ringing my doorbell, just ring it again. If you tap on my windowpane, climb on in. I know what you've been seeking, I'll be your friend.' It is with those words that Midwestern songwriter/producer Will Phalen begins his new full length 'The Dirt and the Air and the Grass.' They are an invitation, welcoming us into a world of storytelling and sonic horizons. A world firmly built upon the folk rock foundations of Phalen's earlier work, but also touched by another set of colors: bold strokes of ambient bliss; vocal harmonies that transport us through the mind of Brian Wilson, across the Atlantic and into the studios at Abbey Road circa 1965; lush drones and a pedal steel guitar flash us back to the collaborations of Lanois and Eno; symphonic strings sing out across a valley of noise before returning us to the lonely tones of an acoustic guitar. And all this is driven by the dynamic, electric pulse of Phalen's new band of collaborators as they push him and his songs into a new and intrepid musical landscape. With a careful ear to the lyrics, we find this is not just an album of tunes, but a collection of stories. 'Shadow People' tells the true tale of a woman in Michigan's Upper Peninsula who waits out night after dark northern night watching for the return of extra-terrestrials. In 'The Saw Song,' we witness the eerie confession of a serial stalker hidden behind the facade of a Byrds-y pop tune. We hear a dying woman's final whispers as she looks back on her life and prepares to be reunited with her deceased husband in 'You Best Be There.' And the album's title track paints the stark but serene picture of a world where we have 'nothing left but the dirt and the air and the grass.' With this album, Phalen and company present a record of transformation: one that traces the artist and his group on a path of rebirth and change, just as much as it leaves us the listeners feeling transformed and renewed. On his journey, Phalen has worn many musical hats and walked down many sonic roads. Born a true son of the Upper Midwest, his earliest 'Stereo Addicts' records delivered strong arguments defining and then redefining the sound of Midwestern Folk Rock. On 2011's psych-folk opus 'Holy Ghost/Gold Coast,' he showed us a glimpse into the mind of a multi-dimensional artist left alone to create in a quiet space. He has produced albums for and collaborated with some of Chicago's brightest rising stars: from the cinematic soundscapes of Julie Meckler's new album 'QueensHead,' to the Americana experiments of Musikanto/Crow Moses, and the insistent pulse of Bailiff's dark pop. He has even accompanied Gary Louris onstage as the Jayhawks' principal songwriter poured through the pages of his rich musical career. Now, on 'The Dirt and the Air and the Grass,' we hear a sound that unites classic American modalities with cutting edge explorations into texture and tone. We witness a group of musicians who can bang out a full-length album in a weekend, playing like a real rock'n'roll band, but who also use the studio as an instrument to add beautiful layers to a piece, perfectly complementing the urgency and thrill of the live performance. But above all, we hear an album of songs. We hear a songwriter committed to his craft, and a band committed to breathing life into those songs. 'I know what you've been seeking, I'll be your friend.'

Here's what you say about
Will Phalen - Dirt & Air & Grass.