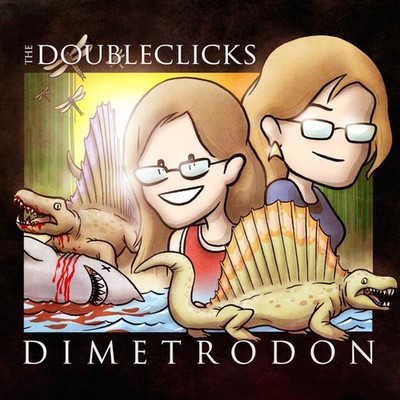 The Doubleclicks are a pair of sisters - Angela Webber and Aubrey Webber - who sing about Dungeons & Dragons, dinosaurs, and Mr. Darcy. They play cello and ukulele. They have been called snarky, geeky, and sweet. Their 2012 album, Lasers & Feelings, debuted in the top 10 on the Billboard comedy charts. Their single for that album, a geek girl anthem called "Nothing to Prove" has been viewed over 1 million times on YouTube. The Doubleclicks tour the country regularly, playing at game stores, comic shops, and conventions, and have shared bills with nerd and comedy superstars including Jonathan Coulton, Paul and Storm and Wil Wheaton. In early 2014, the Doubleclicks raised over $80,000 in a Kickstarter campaign to fund this album: 'Dimetrodon.' Liner Notes: Dimetrodon by The Doubleclicks was produced by Mike Phirman and the Doubleclicks. This amazing album art was all done by Kris Straub. The enclosed poster was created by Lar DeSouza. The Doubleclicks, also known as Angela and Aubrey Webber, thank you for buying their CD. They wrote the songs for this album, engineered most of the sessions and performed vocals, cello, guitar and keyboard cat. The song "Working For Me" was written from the perspective of Angela's ex-boyfriend; that information may help you understand the song more. Some of these songs are true, many are not. Bass, keyboards, background vocals and many other things were performed and programmed by Mike Phirman, who also mixed this album, with the following exceptions: Stephen Webber produced, mixed, performed piano on "Where Did You Go," played guitar on "Dimetrodon" and mixed "Dimetrodon" and "Ennui." Eban Schletter played theremin on "Godzilla." Jason Charles Miller played guitar on "Working for Me." Brent Davis played banjo on "Cats and Netflix." Orchestral arrangement on 'Where Did You Go' conceived and executed by Vanessa Garde. Chris Wainwright engineered the piano recording session for "Where Did You Go." Editing and additional mixing by Ian Kagey. Live tracks were recorded at Norwescon in Seattle by John Seghers and mixed by Aubrey Webber. Aubrey Webber mixed "Wonder" and "Internet Troll." Jonathan Wyner mastered this album. This CD was released in 2014. We were still making CDs back then. Crazy, right?

Here's what you say about
The Doubleclicks - Dimetrodon.