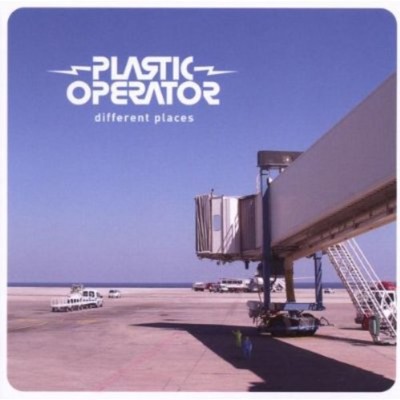 'This is an electro pop classic.' - EQ Magazine 'Pop perfection' - M8 Magazine "Very, very good indeed and very catchy." - Rob Da Bank, BBC Radio 1 'Bliss, absolute bliss.' - Refresh 'Not since The Postal Service have we heard an album that joins together electro and pop so perfectly." - Rough Trade Shop, Album of the Week 'Great stuff!" - Future Music 'Different Places' is the first album from Plastic Operator which was released in Europe to critical acclaim. It's a full, rounded, classy, album, which expands beautifully on the bands catchy but credible indie-electronic blueprint. The album includes the much praised single 'Folder', originally released on Rob Da Banks 'Sunday Best', and picked up for use in numerous films. It also includes forthcoming singles 'Peppermint' - with it's quirky breakbeats and enormously catchy tune, 'Home 0207' - full of squelchy bass, sing along lyrics and classy choruses and 'Why Don't You' - string laden, melancholy, haunting vocals but as with most of this album it sticks in the head in that fantastic way that beautifully indie-electronic music can! Album Written and Produced by Plastic Operator Mastered by Tom Coyne at Sterling Sound Mastering, NYC Plastic Operator Bio Mathieu Gendreau (electronics) & Pieter Van Dessel (vocals / electronics) are Plastic Operator. Respectively hailing from Montreal and Brussels, the pair met at London's Westminster University in 2001 where they were both studying audio production. Bonding over a shared love of two decades of fine electronic and indie music the pair began to make sweet music together. When the course finished Pieter returned to Belgium to work on sound design for films and play in a few bands, and Mathieu remained in London to work as a sound engineer and producer, working with a broad cross-section of the UK's musical talent. The pair kept up their collaborative efforts over the internet, meeting face to face in either London or Antwerp once a month. In 2004, their efforts came to fruition when then the pair released their debut three track CD through a handful of record shops, with Rough Trade making it their CD of the week. Once the tracks were out there in the public domain, things accelerated at a pace no-one could have predicted. The lead track from the CD, 'Folder', had been posted on a web blog, and within weeks Plastic Operator were receiving emails from fans in New York, Mexico City and Bangkok enquiring about the group. Radio stations as far apart as California, New Zealand and Tijuana began championing the song. In London Radio 1's Rob Da Bank began playing the track on his Blue Room show, eventually signing the track to his Sunday Best label. Already picking up admirers from it's inclusion on Rob's latest Sunday Best compilation, 'Folder' was released as a single in it's own right in November 2005. Featuring loving remixes from a range of Sunday Best friends and family (namely Subway, Styrofoam and Shepherds) this is sure to see the pleasures of Plastic Operator become apparent to an even broader audience. Pieter & Mathieu have just released their debut album 'Different Places' in 2007 on Fine Day Records. The album triggered raving reviews across the world and the singles 'Peppermint', 'Why Don't You?' and 'Home 0207' spent weeks and months on the playlist of radio stations such as Studio Brussels, FM Brussels, KCRW... Many Plastic Operator songs are now hitting the dance-floor with remixes provided by creative masterminds Jesse Rose, Speaker Junk, Hermanos Inglesos, Shameboy, Wax Stag, Chewy Chocolate Cookies and the likes. 2007 to 2010 saw Plastic Operator take their music to the stage. Their dynamic live rendition of the album made crowds dance in many major clubs and parties across Europe: from the Bestival Festival on Isle of Wight, to Paris Fashion Week, Culture Club in Ghent, La Fleche D'Or in Paris, Petrol Club in Antwerp and Razzmatazz Club in Barcelona. Plastic Operator is currently working on it's second album.

Here's what you say about
Plastic Operator - Different Places.