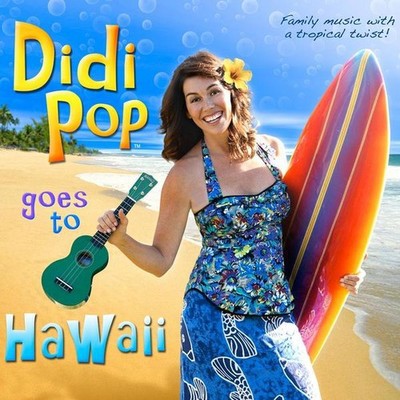 NEWS ALERT! 'The Hawaiian Alphabet Song' wins the Grand Prize at the John Lennon Songwriting Contest in the childrens category! Reviews: KTLA News, Daily Candy, Ladies Home Journal, L.A. Parent and the Desert News love DidiPop Goes To Hawaii. LOS ANGELES -Fast becoming one of L.A.'s hottest kids' musicians, Deborah Poppink - aka DidiPop - invites families to join her on a vacation to Maui with the December 14 release of her new CD, DidiPop Goes to Hawaii (for ages 2 - 8, run time 33 minutes). Allowing her own distinctive artistry to blossom in the gentle atmosphere of the tropical Hawaiian Islands, DidiPop encourages kids and their caregivers to joyfully dance, sing, laugh, and feel the "Aloha Spirit" while picking up some good information about the Hawaiian alphabet, mangos and the hula! Co-produced by Deborah Poppink and prolific producer/musician Brad Jones (Jill Sobule, Josh Rouse, Hayes Carll) and recorded with a first-rate team of Nashville musicians, DidiPop Goes to Hawaii is a musical travelogue inspired by Deborah's actual visits to the Aloha State with her own family. The album captures every subtle nuance of their Hawaiian adventures, from the excitement of the plane ride ("Wowie Gazowi") to enjoying the lovely beaches ("Kapalua Bay") to riding the steam train around Maui ("Sugar Cane Train"), to reading road signs and trying to pronounce the words ("The Hawaiian Alphabet Song"). "The Keiki Hula" perhaps best epitomizes the album's spirit. Explains Deborah Poppink, "I wanted to write a beautiful, lush hula as I imagined singing and dancing my children to sleep under the Maui moon. This song, which was written on the beach at Napili Bay, features my daughters, bird calls, and a little bit of magic." All in all, DidiPop Goes to Hawaii captures and blends just the right balance of reflective, narrative, celebratory, rowdy, and peaceful moods. Each track offers a delightful contrast to the previous track, making outstanding use of instrumental color, with transparent textures and meticulous attention to detail. The music is sophisticated, smart, funny, sassy and real. Deborah Poppink conceived DidiPop as a sound, a feeling, and a way of looking at life that reveals the magic of everyday adventures. As DidiPop, she seeks to inspire boundless creativity in children through the motto "Any Dream is Possible" and to foster an open and empowering parenting energy among caregivers. Says Deborah, "I love taking families on musical journeys where, together, we can discover the world." An award-winning songwriter, performer, and music teacher, Deborah Poppink's resume includes more than 350 compositions, including several for such film and TV projects as The X-Files and the Jack and Jill show. With 28 stamps on her passport, Deborah has collected a treasure trove of unique experiences playing and teaching music in such exotic locales as Bali, Montreal, Laos, Turkey, Belize, Tahiti, Morocco and Malaysia, in addition to performances at L.A. clubs including The House of Blues and McCabe's. She's taught more than 10,000 piano lessons and performed more than 1,000 shows! Deborah's "The Cool Alphabet Song" won a John Lennon Songwriting Contest Award (2009) and was licensed by a Dutch publisher to teach children English. Her "The Cool Alphabet Song" video has become one of the most popular children's music videos on the Internet, receiving nearly 1,000,000 views on YouTube.

Here's what you say about
Didi Pop - Didipop Goes to Hawaii.