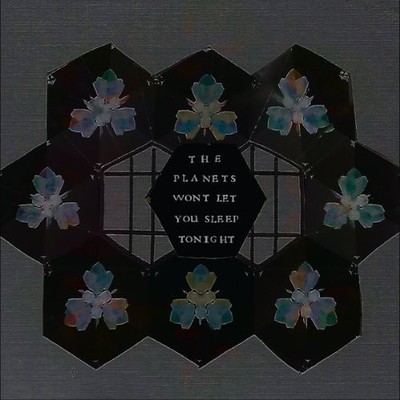 The makers of ABBA and Logans Run come together to bring you THE Planets Won't Let You Sleep Tonight, a schizophrenic auditory explosion. We here at Speed of Dark lovingly refer to them as TPWLYST in the hopes of keeping this press release *short* and also in a continued effort to appeal to only their true hardcore fans who can list all off this abbreviation faster than the band members themselves can. No one knows exactly who TPWLYST are although many claim to be members- including Trent Reznor, Jay Z, Damon Albarn and Kasson Crooker, the synth nerd from Freezepop. Allison Goldfrapp claims to have lent her vocals to this lush soundscape although there are rumors that this is a Jonna Lee side project. Forums on fourchan refer to the singer as the substance 3V3_T3/\, 3V3/T3A or simply as Eve Tea. However, the most likely report is that the vocals are contributed by Tori Spelling- who knew the girl had a talent? In any case, after 13 months of recording in the desolate Swedish town of Hedestad, (at one point right next to the set of The Girl With The Dragon Tattoo!!!), this duo has unleashed an EP so epic that it can only be consumed in really controlled listening sessions. Like truffle or smoked salmon, you cannot and SHOULD NOT binge on this band. In fact, if you want to skip listening to the music altogether and just click 'LIKE' on their Facebook page, they are totally ok with that. After all, there are only 33 Timothy Learys in this world. People have been known to change their entire lives after listening to TPWLYST music. The little known fact is that it was TPWLYST that caused Britney Spears to shave her head publicly. Henry Miller says, 'I remember vividly the first time I heard TPWLYST's music- I was stunned. It was as though I had been given a knock-out blow...Every tone actually heard is a complex entity made up of various elements ordered in various ways, presenting a certain typical relationship to each other. Every tone, in other words, is a molecule of music, and as such can be disassociated into component sonal atoms and electrons, which ultimately may be shown to be but waves of the all-pervading sonal energy irradiating throughout the universe.' We don't know what that means but it's so true! Thus far, you probably haven't heard about TPWLYST because the government has strictly controlled their presence and circulation on the internet. Now, thanks to the help of their childhood friend Stefani Joanne Angelina Germanotta, they are stepping forward and fighting against all government sanctioned bans. Now longer are they confined to Zimbabwe hosted bit torrent sites. They are proud of come forward with their first release on Speed of Dark, a super high tech slick German label. David Byrne said, 'No, this ain't no muddy drag, this ain't no disco!' Bob Moog himself turned in his grave when heard the instrumentation on Destroy Beautiful Things. This music will WAKE YOU THE HELL UP. So much so, you might never be able to sleep...again. One their first village tour of North Korea, TPWLYST were shut down after just three performances because of the trance they induced in unsuspecting citizens. For the first time in their lives, these people understood what it meant to be fr 33. 200 people ran for the border and lost their lives trying to make it to the south side while tourists took Facebook pictures of what is now referred to as 'TPWLYST RUN OF FURY.' TPWLYST truly want to bring about a veritable cosmic disturbance. If they could control the ether waves and blast everything off the map with one turn of the dial I think they would die in ecstasy. Time rolls away. Space folds up.