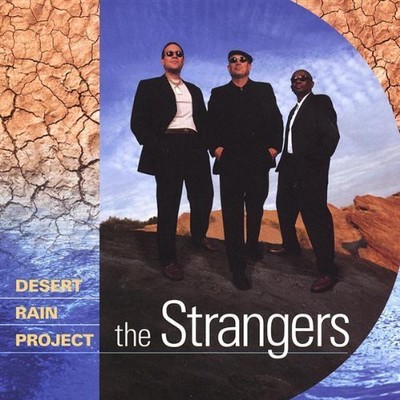 The Strangers: Desert Rain Project Label: Independent Records Inc. Sound/Style: Vocal-driven, rhythmically rich pop with world music and R&B elements By Steve Morley (UMCom) - As iron sharpens iron, the three distinct individuals who comprise The Strangers bring out the best in one another. Together they combine classic soul, contemporary R&B and African elements into a singular and multi-faceted sound. Any one of these mature singers and performers could capably entertain. It's to our gain, though, that all three have pooled their talents to create the stylistic synergy heard on Desert Rain Project. While technically an independent release, this disc contains the added clout of established Nashville producer Phil Naish and a cadre of session pros. The supporting cast plays a substantial role in the overall sound, but The Strangers themselves are hardly being carried along by the hired help, bringing songwriting strengths to the table as well as seasoned, soulful voices and a natural chemistry. Naish displays his highly commercial thumbprint on the country-pop 'I'm Amazed,' 'Freedom' and 'Rain Upon Your Desert,' a slice of blue-eyed soul recalling '80s hitmakers Ambrosia. Despite Naish's skill, the most pleasing and original songs are the ones that stray furthest from the hit factory formula, allowing all the group members' varied influences to coalesce. The lithe leadoff track 'Shine Your Light' attains an ideal balance of funk and finesse, alternating between a sandy-yet-smooth three-part vocal chorus and a rousing refrain that kicks aggressively into guitar-and-drums overdrive. No subsequent moment on the record captures comparable power or contrast, but several songs excel on the strength of their subtlety and stylistic breadth. 'Quench The Thirsting' - one of three tracks that provide the CD's core theme - is an atmospheric, jazzy offering in a Sting-like vein. The track is one of several that features group member Tui Letuli on expressive lead guitar and African-born Alan Kisaka's yearning bilingual vocal. When he breaks out in his native tongue on this piece and the delicate 'African Rain,' he provides the album's most invigorating multicultural moments as well as a stirring musical depiction of a creator who is far bigger than any single region or nationality. Evident throughout the disc is an economy with lyrics that is typical of African music. Simple phrases like 'I am thirsty, rain down on me like the African rain' exude warmth and devotion, making them well suited to personal worship. The record focuses on God's promises of freedom, deliverance and relief, but it exhorts listeners to 'shine all over the world' and offers the occasional bold statement. In a voice full of grit and gristle, vocalist Scott Wilderman belts out this warning on 'Rare Earth' - 'if you haven't died and rose again/if you haven't let Jesus take on all your sin/I suggest to you that you haven't been born again/and your clay pot is growing old and thin.' Closing the CD is the spacious, gently rhythmic 'To A Place,' which joyfully anticipates eternity, it's exotic flavor offering a glimpse of the coming celebration with every tongue and tribe in attendance. With it's blend of slick pop, classic soul and organic, global sounds, Desert Rain Project combines the best of two worlds, in more ways than one. Steve Morley is a free-lance music journalist living in College Grove, Tenn.

Here's what you say about
The Strangers - Desert Rain Project.