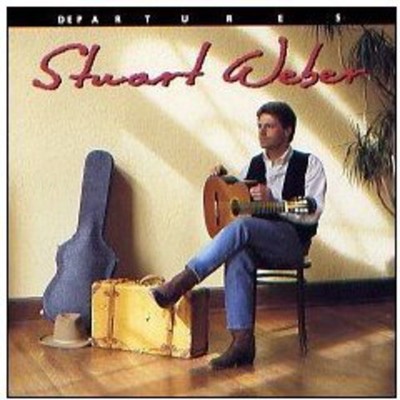 On 'Departures,' Weber performs classical guitar compositions inspired by his dearly loved Montana, and enhanced with stringed accompaniment. These unforgettable collaborations with cello, harp, percussion and more, are some of his most romantic contemporary classical guitar offerings yet. Stuart Weber is among a new breed of classical guitarist, one of today's prophetic players shaping the future of the instrument. He performs the classics with uncompromising virtuosity while his original compositions interpret the natural environment with inspired reverence and sensitivity. Born in the Northern Rocky Mountains, Weber's passion for the land equals his passion for the guitar. These forces created an imaginative and distinctly talented musician. His formal training began at 26 when he embarked on a fruitful apprenticeship with legendary American guitarist Christopher Parkening. In this fertile setting, Weber's fresh, innovative style gained classical sensibilities. Under the guidance of his mentor and nurtured by Montana's long winters, Weber refined his technique and artistry. Weber's concerts are versatile and intimate. While embracing the beauty of the existing classical guitar repertoire, he is expanding the body of work by premiering his own elegant transcriptions. Stuart Weber's original compositions draw out the unique character of the West, earning him a reputation as an artist of musical landscapes. The Denver Post praised Weber as 'a Western original,' and the Christian Science Monitor writes, 'There is a depth of expression, even passion, both for the instrument's possibilities and for the music.' Mr. Weber has appeared as guest artist with symphony orchestras and chamber groups, and has collaborated with several renowned soloists, both in the studio and on the concert stage. In addition to five highly acclaimed recordings on Bridger Records, Stuart Weber shares his talents with young people through his Master Classes and school presentations, engaging students in the art and beauty of the classical guitar.

Here's what you say about
Stuart Weber - Departures.