Preacher Boy - Demanding to Be Next 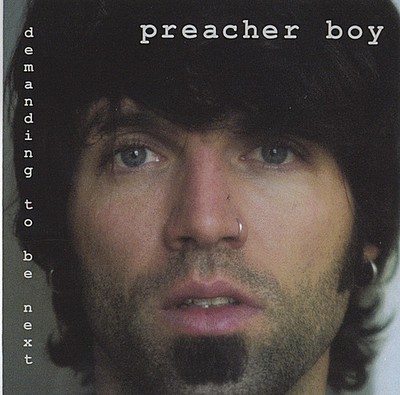 Artist: Preacher Boy Current Release: 'Demanding To Be Next' Record Label: Coast Road Records Musical Style: Acoustic Americana-Blues. Preacher Boy performs solo on vintage National Steel Guitar, and other vintage acoustic instruments. Hometown: Rocky Point, New York Points of Note: 'Demanding To Be Next' is Preacher Boy's fifth album, and his first solo acoustic disc. His previous releases are featured in The Rolling Stone Jazz and Blues Album Guide. He has toured all over the US and Europe as a solo artist, including opening for Grammy-winning multi-platinum artist Eagle-Eye Cherry in 17 countries. Preacher Boy's lyrics and guitar playing can be heard on Eagle-Eye's new album Sub Rosa, as well as on his previous release Living in the Present Future, including the international hit 'Long Way Around.' Preacher Boy's vocals are also featured on the song 'An Area Big Enough To Do It In' by Prophet Omega, from the Queer Eye For The Straight Guy soundtrack on Capitol Records. Previous Releases: -The Devil's Buttermilk (Manifesto Records, 2000) -Crow (Wah Tup Records, 1998) -Gutters and Pews (Blind Pig Records, 1996) -Preacher Boy and The Natural Blues (Blind Pig Records, 1995) Press Quotes: 'Demanding To Be Next demands attention instantly. On the tender opener 'A Little Better When It Rains,' Watkins blends fingerpicking and slide. His voice, a cross between those of Kelly Joe Phelps and Tom Waits, has an otherworldly quality that makes him sound like no one else and suits his quirky songs well. Flatpicked folk song 'Whistleman' packs detailed, offbeat imagery that recalls Dylan's best. It's ominous feeling gets under your skin, setting you up for the album's only cover a few tracks later, a strong reading of Son House's 'Death Letter.'' Blues Revue 'Preacher Boy crosses the traditional country blues of haunted legends like Robert Johnson and Son House with a modern, rock-influenced perspective similar to Jon Spencer or Jack White of The White Stripes, branding the sound with his own distinctive mark.' All-Music Guide 'Preacher Boy is somewhat like Keb' Mo' in his jazzing up of Delta blues styles, but with a more contemporary sound akin to Kelly Joe Phelps or Chris Whitley. The best cuts highlight his wonderful work on National Steel.' Rolling Stone Jazz and Blues Album Guide.

Here's what you say about
Preacher Boy - Demanding to Be Next.