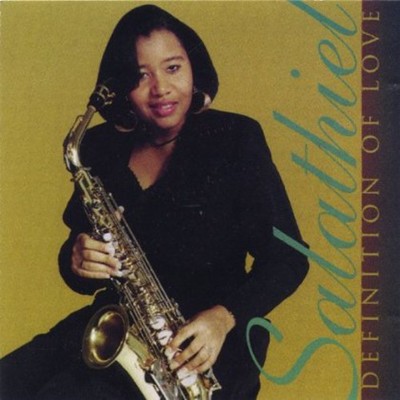 In 1999, Salathiel rocked the world with her debut 'Definition of Love' which set another new standard for Jazz Music. Salathiel Marie Allen began showing a passion for music at a very young age. Her major instrument is the saxophone for which she is more widely known, however, she is also an accomplished keyboard player, drummer and vocalist. She is also an accomplished songwriter and has written and composed a variety of inspirational songs. The captivating sound that comes from the saxophone of this multi-talented musician arouses emotions, uplifts the spirit and amply displays versatility and uniqueness. Her music touches the heart, mezmerizes the mind and soothes the soul. God enables her to deliver her gift with an anointing that brings her audience to their feet. In January of 2001, Dr. Dorothy Height, president of the National Council of Negro Women, invited Salathiel to Washington, D.C. to play at a luncheon where President William Clinton was keynote speaker. Some of Salathiel's musical accomplishments include recordings with several major artists known throughout the United States, including Rev. Rance Allen & Group, Rev. John P. Kee, Vanessa Bell Armstrong, the late Dr. Mattie Moss Clark and Chris Byrd & True Victory - just to name a few. Some of her accomplishments include a number of recordings and stage performances with many secular and christian artists i.e., Merrill Osmond (of 'The Osmond Brothers'), Guy, David Peaston, Gladys Knight, Vickie Winans,Donnie McClurkin, Vanessa Bell Armstrong, The Clark Sisters, John P.Kee, Rance Allen, Chris Byrd, Dr. Bobby Jones, Richard Smallwood, Yolanda Adams, Bebe&CeCe, Beverly Crawford and so many others! Salathiel has performed for the former President Bill Clinton while in office, Annual Stellar Awards Nomination Reception and BET Television's 'The Bobby Jones Show'. Salathiel recently released her second album, entitled 'Saxsational', which is an explosive rendition of twelve (12) soul stirring songs. Salathiel lives in Michigan with her husband, David, and their daughter, Salathia. Salathiel's new debut CD 'Saxsational' brings vision and an astounding sound that stirs your heart and soul with love, healing and excitement!

Here's what you say about
Salathiel - Definition of Love.