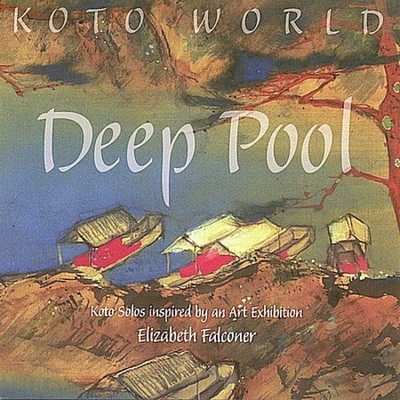 Recipient of a 2004 'Best Solo Instrumental Album' Award from Just Plain Folks music! Turn-of-the-century Japanese paintings inspired Elizabeth Falconer to compose these works for solo koto and bass koto. Classical koto forms combine with contemporary techniques to create a meditative, thoughtful musical landscape. Koto Master Elizabeth Falconer began studing koto in 1979. After over a decade of studies in Japan under koto masters Sawai Kazue, Sawai Tadao, and Nagane Utayumi, she returned to the states to perform. She is the recipient of Parents' Choice and NAPPA awards and is active in the Pacific Northwest as a performer, composer, storyteller and collaborator in a wide variety of artistic projects. She created the Koto World label in 2000 to promote Japanese koto music and storytelling. She has also recorded for Narada, Paras, Sparking Beatnik, and Music and Arts. Review by Wiley Fox (Amazon Top 100 Reviewer) I was reading a really good book and thought to put on the Deep Pool CD I had just received. Immediately I found myself unable to read, giving undivided attention to the CD. By track 4, a tear ran down my face, it was just so beautiful. The next 5 tracks are interesting sound-art-recollections of bird songs and flights. The last two tracks are long and deeply unusual, underlining what the entire album made me feel. It's like something came out of the composer's head and came to live in my head, by way of koto, and you are not even particularly 'hearing' the music anymore. Amazingly, 'Moon at Uji' strikes a comparison to Captain Beefheart's 'Dali's Car.' My guess is that Deep Pool must be some kind of peak of Falconer's composing skills. Review by Joanna Daneman (Amazon Top 10 Reviewer) This isn't really an album of traditional Japanese music, though the koto is the quintessential Japanese instrument--more recognizable and associated with Japan than the shakuhachi flute. Elizabeth Falconer opens the album 'Deep Pool' with a very traditional-sounding Japanese composition but then moves into more expressionistic, meditative and modern compositions that showcase the koto but have little to do with Japanese music. That's what makes this album unique. Falconer takes full advantage of her skill with the koto and creates water sounds, bird sounds, and some very nice original compositions. This is just what you'd like to have being played while having a massage or while meditating or just relaxing. If you are a massage therapist, you will really want this album. If you like something to chill out the kids before naptime or to go to sleep by, you might find that falling into 'Deep Pool' is just the thing. I like it a lot for creating a restful mood. Review by Randy Raine-Reusch in MUSICWORKS: Deep Pool is a beautiful series of new compositions by Elizabeth Falconer that are written with a more traditional koto aesthetic. Elizabeth studied koto in Japan with the Sawais and others for more than ten years, and has developed her own unique voice on the instrument. The works on Deep Pool were inspired by a series of artworks from Kyoto that were displayed at the Seattle Asian Art Museum in the fall of 1999. The music at times certainly parallels the rich elegance of the paintings. These pieces fall easily on the ear and, to the average listerner, may sound like the traditional koto music to which they are accustomed. Yet these are contemporary works, reminiscent of the compositions of Michiyo Miyagi and the early works of Tadao Sawai.

Here's what you say about
Elizabeth Falconer - Deep Pool.