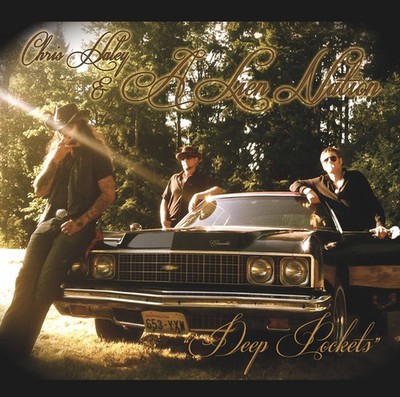 As long as the world hurts, the blues will be present. Meet A Lien Nation, a dynamic band here to to help spread some love through music and storytelling. Pulling from the greats and writing music that maintains a strong message or concept along with the voicing of blues/rock n roll guitar, intuitive deep bass, and eloquently phrased drumming. The goal of the music is growth and spontaneity; which is why they are known as a "live experience". They reciprocate their environment and cater to the hearts of the listeners. A Lien Nation is rooted in the blues and rock n roll genres but prefers the term "Outlaw Blues". Sometimes the blues is happy, sometimes it is angry, and sometimes it is downright sad. Regardless of the subject matter, A Lien Nation is sure to entertain both on a sonic level, and also as a visual performance in style and class. Cheers. A LIEN NATION (ALN) was born in April of 2011. Based on a vision of Christopher Haley. He was determined to create/pursue a new genre of music. Raised by the biker community, he grew up listening to the blues, and rock legends such as Led Zeppelin, Jimi Hendrix, and Stevie Ray Vaughn. Chris's vision would blend the cool, sexy rhythm of the blues with fiery sound of 70's inspired groovin rock. He would call this music 'Outlaw Blues'. ? And so it began, in April 2012, Chris Haley began meeting his 1st band members of what would be called A Lien Nation. By the end of the month they had become a 5 piece with sometimes special guests guitar legend Sammy Drain, and Todd Duncan of the Crazy 8's. By February 2013 Chris had gone through many band members to find the RIGHT band mates. And by February 2013, the previous 5 piece had become a 3 piece with all new members and Chris as the only original member. With this change came a new sound, a new energy, a new band... it was the BEST A Lien Nation had ever sounded. With front man, Chris Haley on the guitar, Casey Kunning on the bass, and John Cave rocking on the drums, people went nuts for their outlaw blues! This began the new era for ALN. Their show offers went from great to amazing, they recorded and released a new album, and some of their musical dreams came true. This IS the new era for ALN. ? A Lien Nation has been the headlining band of Montana's Testical Festival for the past 5 years. They have had the honor of playing with notable acts such as Sammy Drain, Todd Duncan, Randy Hansen, Mike McCready of Pearl Jam, Cold Hard Cash, Michael Wilton of Queensryche, and many other amazing local bands from the Pacific NW. ALN has played many world famous festivals and tattoo expos throughout the Pacific NW, and have had the pleasure to play at some of the best venues Seattle has to offer. They are currently writing the follow up to Deep Pockets which will surely take things to the next level.

Here's what you say about
Chris Haley - Deep Pockets.