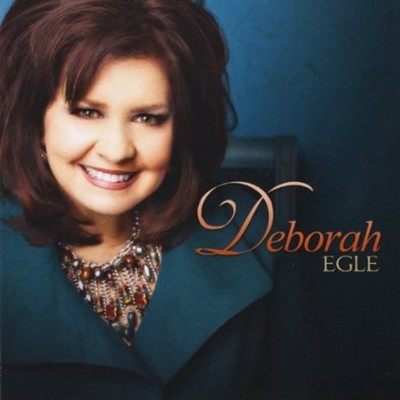 Singer/Songwriter Deborah Egle, has released her self titled debut solo album, on the Loradon Music Label, but she isn't new to christian/gospel music. She was a vocalist and one of the founding members of the Detroit based group The Renaissance in 1973-'84 and recorded several groundbreaking albums on the Zondervan Record Label. She has appeared on 700 Club, TCT Network, PTL, 100 Huntley Street, and their music is still heard on radio stations around the world. Through the years Deb is often referred to as the 'Karen Carpenter of christian music' and her performance demonstrates that the title may be well deserved. According to artist/friend Mark Lowry 'her rich alto voice still sounds like velvet'. Reminiscent of the Carpenter phenomenon, the album offers up beautiful melodies, tight harmonies and Deborah successfully incorporates other musical influences to round out the experience. This project includes the Grammy nominated Booth Brothers and former Gaither Vocal Band member Marshall Hall as special guest artists. The collaboration between these accomplished vocalists really works. Deb, along with the Booth Brothers, breath new life into the Russ Taff tune 'Whenever I Speak His Name' and her duet with Marshall Hall on 'There You Are' will take you back to the beautiful pop ballads of years gone by. Although Deborah has written vocal arrangements in the past, she discovered the ability to write songs during her hiatus as wife and mother. She was encouraged when multi-Grammy Award winning songwriter Randy Goodrum (of 'You Needed Me' fame) heard her song 'Everything Will Be Fine' then sent an email that said 'love the song...keep writing' and she did just that. Deb's song entitled 'God Loves You More' is a soulful lullaby dedicated to her children and seven of the ten tunes on this CD are her original works (BMI). 'Many people thought I was walking away from music when I hung up my singin' suit to shape little lives for God' said Deborah. 'But God knows what He's doing and no one was more surprised than I was when the songs came pouring out of my soul.' Deb highlights the stories behind the songs on her website and offers a look into the songwriting process. The album was recorded at various studios in and around Nashville and include some of the greatest musicians in the industry like Grammy Award winners Brent Mason, Dave Hungate, John Hobbs, Pat Coil, Mike Rojas, Shannon Forrest, Eric Darkin, and Sam Levine - just to mention a few. If you've ever listened to Vince Gill, Michael McDonald, Toto, Michael Bolton, Toni Braxton, Tim McGraw, Amy Grant etc. Etc., you've heard these great musicians play. The beautiful string arrangements were written by former Renaissance Producer John Darnall, an highly successful musician in his own right. Engineers included the very talented Rodney Ingle, Brendan Harkin as well as the Grammy Award winner Brent King. The album was co-produced by Deb and her multi-talented brother Darrell Toney (a member of Terry Blackwood and the Imperials) and who is an accomplished guitarist in his own right. 'Deborah Egle' is more than a debut solo album by a seasoned artist, it is a musical journey and every song is worth the listen. If you are still a fan of the '1970's, '80's, & '90's pop sound', you're going to love this album. If you are looking for an album that clearly delivers the truth of God's word - it's a must have!