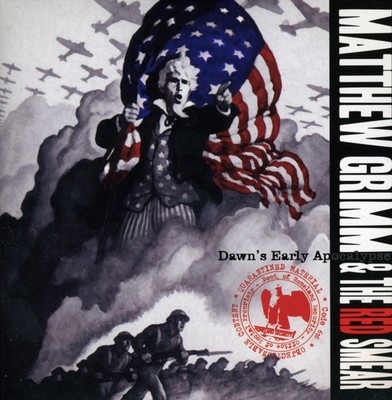 PRODUCED BY PETER LUBIN AND PETE ANDERSON MIXED BY TONY RAMBO AND DOUG JOHNSON What if a legendary multiplatinum L.A. producer helped some no-name schmuck from Iowa make a splendorous, seething, unabashedly leftist rock record and even the hipster indie label community almost universally deemed it, to quote one indie hipster's rejection email, "too in-your-face" to release? Do even the 'edgiest' of our cultural gatekeepers now toe the line as to what art is acceptable, what ideas listenable, in homogenized, "wartime" America? Well now you can answer that question for yourself. That CD, the now self-released DAWN'S EARLY APOCALYPSE, is the net of songwriter Matthew Grimm's two-week stay at the Burbank, Calif. Studio of Pete Anderson, widely considered one of the world's best guitarists and producer of the bazillion selling records of Dwight Yoakam, Michelle Shocked and others. Yes, this record seeks to blast the dentures off the America's prim and proper groupthink, often profanely so-and wouldn't be doing it's job if it didn't. As Anderson's stewardship evinces, it also offers blazing guitars, immaculate production and lyrics that echo the rage of millions watching their country slipping away from them. Grimm earned some renown in the roots rock or Americana arena over 10 years with the New York band The Hangdogs, but his first 'solo' record under the aegis of Matthew Grimm & the Red Smear dispenses with all pigeonholing. This is a f-ing rock record. It is a punk rock record, a pop rock record, a roots rock record, a rock record in the best tradition, drawing on the many tributaries that have fed the river of American music. It is in fact a snarling dissent against the amorphous mass of corporate crap that has dammed that stream and made a fetid swamp of our culture, and an attempt, inthe same breath, to give voice to common sense and the common man where few others will. Still, Dawn's Early Apocalypse more than matches Grimm's revolutionary verve with songs utterly disarming in melody, soul-rattling instrumentations and, above all, words by turn poetic, furious and funny. It is a testament to all that has been winnowed out of our once-great forum, countless voices not considered Clear Channel- or MTV-friendly, thus generally going unheard at the very time we need them most. "Me, I'm gonna play the hell outta this stuff, stick it on mix CDs, blast it on my radio program, rock the tavern on my weeklyDJ night and force every hard-working, beer-guzzling, non-voting dumbass friend I have to listen to every word of it. Until I hear stuff like this rammed down my ear-holes as fervently and repetitively as I currently do "patriotic" pabulum like TobyKeith, Pat Robertson and Bill O' F-ing Reilly, I'll consider it my duty as a proud, practicing, rock 'n' roll preachin' American . . ." -Pulse of the Twin Cities "Those who like their rock 'n' roll pretty and polite should avoid Matthew Grimm & the Red Smear, as wanton a band ofaural barbarians as ever assaulted a soundboard . . . That [Grimm] couples his populist protests with a slashing wit makes it all the more imperative that the tracks on Dawn's Early Apocalypse find a wider audience." -Playback: StL ". . . The hardest hitting leftfielder this side of Manny Ramirez." -Iowa City Press-Citizen "GenXers have rarely had more articulate spokesmen." -Ottawa Citizen READ MATTHEW'S VOLUMINOUS, SEDITIOUS PROSE AND DOWNLOAD AMATEURISH LIVE TRACKS AT REDSMEAR.COM.

Here's what you say about
Matthew Grimm - Dawn's Early Apocalypse.