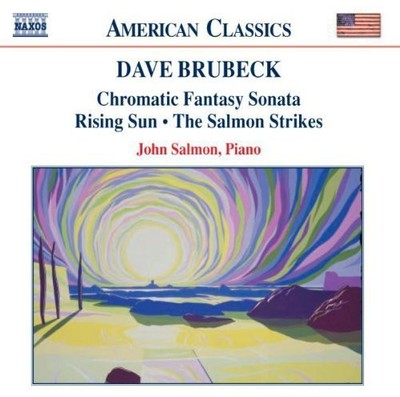 The major work on this recording is the Chromatic Fantasy Sonata, a composition that emerged from a commission by the chamber music group, An die Musik (violin, viola, cello, oboe, piano). The original commission stipulated that I open the work with a few bars from my favorite composer. I chose Johann Sebastian Bach, and the exciting, dramatic rising scales of Chromatic Fantasy and Fugue in D minor (BWV 903) as an opening for my own Chromatic Fantasy. Various allusions to B-A-C-H (the German note names for B-flat, A, C, and B natural) are heard throughout, most obviously in the Allegro molto movement and appear in various disguises in other movements as well. The influence of Bach carries over into the titles of the movements. Chorale starts out in a four-voice format that suggests the SATB choral texture of Bach's own chorales. Fugue is actually a triple fugue in four voices whose three subjects are woven throughout the four movements. Two of these subjects are tone rows, one of which starts out with a kind of inversion of the B-A-C-H motif. Chaconne uses a left-hand ostinato and a right-hand melody, similar to a piece I had written for jazz ensemble, called Jazzanians. With it's lively triplet feel and blues riffs Chaconne is the jazziest of the four movements. A string quartet version of Chromatic Fantasy Sonata was recorded by the Brodsky Quartet of England. John Salmon subsequently transcribed the fugue movement written for the string quartet to the present solo piano version. Tritonis, like so many of my more extended, written-out compositions, has a varied history. Originally written on commission as a piece for guitar and flute (1978), it then became part of my jazz quartet repertoire using the theme as the basis for improvisation. (This jazz quartet version can be heard on the Columbia/Legacy CD box set Time Signatures: A Career Retrospective.) In the piano solo version I retain the central harmonic device, namely two chords a tritone apart, as in the opening where an E major arpeggio is followed by one in B flat. The tritone has played a prominent rôle in my own improvising, since it consists of two very important blues notes, the key note and flattened fifth. My composition teacher, Darius Milhaud, frequently placed two chords together whose roots were a tritone away, creating a polytonal texture that resembled the extended harmonies of the bebop era in jazz. Since the piece originated as a guitar and flute piece, guitar sounds, especially those of the open strings (E-A-D-G-B-E), permeate the work, occasionally evoking the sound of flamenco music.