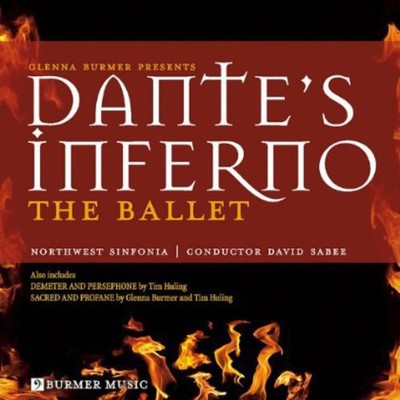 Dante's Inferno: the Ballet is a new ballet premiering on February 21-23, 2014 at the Theatre at Meydenbauer Center in Bellevue Washington. The ballet is based on the Inferno, the first part of Dante's poem, the Divine Comedy, which chronicles Dante's journey through Hell, Purgatory, and Paradise. The ballet combines original music and choreography, demonic dancing, dramatic costumes and hand-crafted masks. The music, composed by Glenna Burmer, was conducted by Grammy-award winner David Sabee and featured the Northwest Sinfonia orchestra and a chorus with soprano Maria Mannisto. The six scenes of the ballet chronicle Dante's adventures as he is led by the poet Virgil down into the levels of Hell and returns to earth. The music becomes progressively more dissonant with each level, until Dante is face-to face with Satan, who is snoring and periodically awakens in a fury. When Dante and Virgil escape from Hell, they are greeted by a night sky filled with stars and the ethereal heavenly choir. Hell's Elevator Music is the Intermezzo for Dante's Inferno, and depicts Glenna Burmer's vision of what a doomed soul may experience when he takes Hell's Elevator down to the level of Hell to which he or she has been assigned for punishment. The Elevator Muzak stops at each level, a bell rings, the doors open, and a sinner exits into a nightmare. When the elevator reaches the ninth level, the doors open and the piece ends in a Devil's chord (augmented fourth). Demeter and Persephone, composed by Tim Huling, tells the story of the Greek goddess of the harvest and her daughter Persephone, and brings to life the cycle of the seasons. The music begins with Demeter's manifestation of spring and her love for Persephone. When her daughter is abducted and taken by Hades to become Queen of the Underworld, Demeter's resulting despondency causes her to wander and refuse to nourish the earth, creating the season of winter. The story ends when Persephone is reunited with her mother and spring arrives again. Sacred and Profane is a short ballet exploring the struggle between two sides of a woman's personality: serene and cool (Sacred), and fiery and passionate (Profane). Each dancer is featured separately until the pas de deux that represents a merging of the two sides into one personality. The original music was a collaborative composition between Glenna Burmer and Tim Huling, with Joseph Adam on piano, and Stephen Bryant on violin.

Here's what you say about
Northwest Sinfonia - Dantes Inferno-The Ballet.