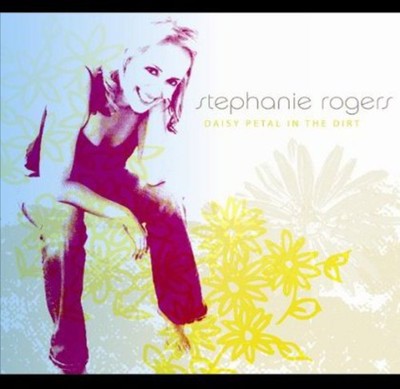 'Stephanie Rogers is at once a deep-rooted soul sister and an ethereal, multi-instrumental songstress whose sound evokes the passion of Tori Amos, the be-bop chill of Rickie Lee Jones, and the siren of Kate Bush. Her dynamic range and vocal style are welcoming, memorable, and delivered with a top-notch infectious approach that leaves the audience longing to hear and learn more about her.' 'Rogers, who founded Hipchick Records in 2000, is known for her clever lyrics, quirky humor and soulful melodies. After performing in the alternative rock scene around Chicago in the early 1990s, she moved to Los Angeles to act. She learned how to play guitar, moved back Chicago and started Hipchick Records. After spending 10 years as a full-time mom, she's returning to the music scene with her new album, 'Daisy Petal in the Dirt.' From the first few notes sung on 'Hand of a Rebel,' it becomes very clear how powerful a vocalist Stephanie Rogers is. It's this strong voice, coupled with strong songwriting, which makes Rogers' third album, Daisy Petal In The Dirt, an enjoyable experience. Rogers doesn't embrace any one musical style on the album as virtually every song has a different feel to it whether it be through a change of genre, moving from a piano to a guitar based track, or by creating a very unique narrative to go with whatever kind of sound she embraces. With the main unifying force on the album being Rogers' voice and songwriting, Daisy Petal... becomes a spectacular showcase of her talents. If there's one sound that's more prevalent than others, it's the piano and keyboards. Toward the end of the album appears the song, 'Come Orion.' Rogers' builds her arrangement off of a piano and allows it to build with strings, additional keyboards, percussion, and a soaring vocal. These are recurring elements on other songs, though they're not employed in the same way. 'Daisy Petal' for example, starts off with the stirrings of a string section and then leads into a bouncy piano melody. Again, the song continues to layer on additional sounds until it reaches the chorus and erupts. The music echoes the lyrics strongly as Rogers describes the mundane life of a woman during the verses and belts out in the chorus 'Girl, come and hold my hand/Let's figure out, an escape plan/Girl don't you wanna shout/Come get me out, come get me out.' The best example of this kind of explosive songwriting is on the epic sounding, 'Rhonda.' Another piano based number, Rogers exercises her voice by sliding through some notes and sustaining others with beautiful power and melody. When she reaches the chorus, her voice leaps to great effect, and much of the song's majesty comes from this stellar vocal performance. The rest of the grandeur comes from the backing arrangement; the percussion and strings in particular. When Rogers belts out, 'Goodbye,' the quick, powerful drum fill underneath it, adds more force to an already forceful moment. One of the more interesting numbers from a structural standpoint is 'FB Song.' Unlike many of the other pieces, this one is built off of light keyboards and a steady drum beat. Outside the instrumentation this song is also unique for how it so easily changes from 4/4 time to 3/4 and back again throughout. Lyrically, the song details how the singer goes through what we can presume to be a certain social networking site and digs up too much of the past, including an ex boyfriend in particular. It's a quirky narrative to go along with an equally quirky arrangement. These little slice-of-life stories are also the subject matter for 'Old Men' and 'Girl at the Beauty Shop.' The former is actually built around the guitar, and in 3/4 time, parallels the dwindling time of two old men with the singer's aging. The latter is another uniquely conceived piece that changes it's tone similarly to how 'FB Song' does. In this case, the singer finds herself listening to the lamenting of a hairdresser and her relationship, and though she knows exactly what path her hairdresser is going on, tries to bite her tongue. Both pieces are wonderfully played, and continue to show the talent Rogers has for pairing music and lyrics. The only thing missing from Daisy Petal in the Dirt is a cohesive sound. Despite this, virtually every song on the album is a wonderful listen. 'Maria' is the one misstep here, but only because the song feels half-complete. Being a less than two-minute long, jazz inspired piece, it completely comes out of left field and sounds like an outtake that mistakenly got thrown onto the CD. That being said, it's a well done piece, it just doesn't sound finished. Everything else on this release from Stephanie Rogers is a strong showing of a very talented singer/songwriter with an ability to craft unique music that never forgoes being listenable either. Review by Heath Andrews Rating: 4 stars (out of 5)

Here's what you say about
Stephanie Rogers - Daisy Petal in the Dirt.