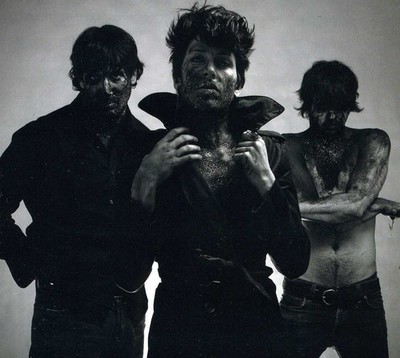 CUSSES Announce Debut Self-Titled Album Due Out October 30 (HA! Records) Cusses, the Savannah, GA-based 3-piece rock outfit, are making their long anticipated debut album, the self-titled Cusses, available on October 30 via their own label, HA! Records. This collection features their MTV-approved first single "Worst Enemy" Cusses aren't easy to define. However, whether their guitar driven, fuzzed out brand of music reminds you of The Runaways meets The Ramones or Siouxsie and the Banshees meets Jet, or even Pat Benatar with some heavy handed riot grrrl sass, it is impossible to come away with any other conclusion than this: Cusses are bringing back real, effortless, speaker-blasting rock & roll. A band that would be right at home taking center stage at CBGB. Lead singer Angel Bond was introduced to drummer Brian Lackey through mutual friends, and they have not separated since. The two moved from Los Angeles, where they worked in the art department for print and film together, to follow their passion for making music and performing. They headed to Savannah, Georgia in 2009, and met up with Brian's long time friend, guitarist and past band mate, Bryan Harder (they opened for post-hardcore legends Fugazi in their last band together!). The three formed Cusses that summer and played their first show in February 2010. And now their debut album, Cusses. Produced by Dan Hannon (Manchester Orchestra), Cusses is a relentlessly engaging collection of edgy, refreshing rock. Bond's wistful vocals cut brilliantly through strong, unyielding drum beats and commanding guitar riffs while the layered guitar parts played by Harder eliminate the need for a bassist, reminiscent of 90's grunge era bands. The album features the hard-hitting, high voltage lead single "Worst Enemy", the breezier, misleadingly sunny sounding "Blood Everywhere" and the anthemic "Don't Give In" featuring the added talents of Manchester Orchestra's Andy Hull, taking on co-writing responsibilities with Bond.

Here's what you say about
Cusses - Cusses.