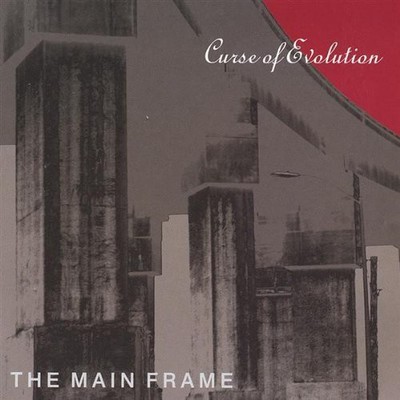 The Main Frame highlights two years of creative process on Curse of Evolution, the first full recording from the LA - area quartet. This album clocks in at under 35 minutes, but each of these ten tracks is a full-scale exercise in rock and pop forms. Curse of Evolution draws from a palette of both modern and classic synth, new-wave, and post-punk sounds. Dance-rock drums and melodic picked bass hooks drive the listener through each dark vignette. A wide array of synthesizer sounds fills the space between the minimal guitar rhythms and leads. Nestled with precision in this instrumental framework lies the vocal lead, further tying together the album with a persistently ominous lyrical theme. Curse of Evolution was recorded digitally with a good selection of microphones and few overdubs - the rhythm section retains energy and adds a live feel to the dark, composed tracks. The vocal takes are raw and undoubled, to match the spontaneity of the instrumental tracks. In the mixing stage, Jeff Harris (Nobody, Mia Doi Todd, Free Moral Agents) turned the band's tracks into what could be described as a modern take on a new-wave production. The mix is up-front and radio-friendly, but retains enough natural sound to preserve the emotion of the individual performers. The album closer, vocoder epic Beyond Life and Death, gives the listener a soft goodbye with a more open, rock production. The Main Frame hail from the Bay Area, Southern California, and Arizona. Their musical backgrounds are even broader, running the gauntlet of independent styles. Bound together by a common love for the music of Britain and New York in the late 70's and early 80's, the band formed with the initial concept of the new-wave band, taking as greatest inspiration bands like Tubeway Army, the Cars, and Devo. From the beginning, however, there existed a dark thematic undercurrent and a group desire to strip the camp and humor from the image of New Wave. The band's sound has slowly evolved and dance beats have become more prevalent in the newer material. The Main Frame has embraced what they initally resisted - the stylistic influence of Joy Division, New Order, the Cure, the Chameleons, and Gang of Four - and their modern counterparts. In their instrumental makeup, the band proudly wears all of these influences. However, the songs of Curse of Evolution themselves are neither derivative nor uninspired.

Here's what you say about
Mainframe - Curse of Evolution.