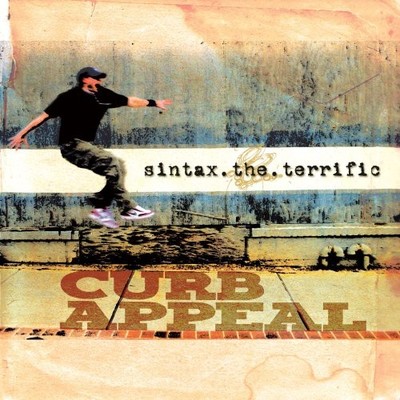 Sintax is respected not simply because he's a raw rhyme-spitter, handsome roughneck, and charming tru-school emcee. Although, he is certainly all those things. Sintax is respected because he's transparent. To understand Sintaxone needs only to hear how others feel about him: "It's rare when an artist can leave you utterly speechless. Leave you with that mind-controlling feeling that seemingly forces you to stop whatever you're doing and just listen. Listen to the words, listen to the beat, comprehend the message, and ultimately immerse yourself in every intricate element of the music. When the CD stops spinning...you're left questioning yourself, questioning Sintax, questioning your neighbor, and questioning God, all the while starting to find answers in these very same places.... There's no limit to the amount of superlatives you can attach to music like this.... Sintax.The.Terrific makes terrific music." - RapReviews (July 8, 2003) Sintax is a founding member of the mighty deepspace5 crew (Gotee Records). He was an integral part of it's first, widely available release, in 2001, "The Night We Called It A Day," (Uprok Records) and it's 2005 sophomore record, "Unique, Just Like Everyone Else" (GoteeRecords). Sintax released his first solo record, aptly entitled "Simple Moves," with Illect Recordings, in 2003, to a solid and sustained reception among fans of independent hip hop. His most recent album, "Curb Appeal," is a purposeful continuation of the thoughtful style of emceeing for which Sintax is known and appreciated. Curb Appeal showcases his relentless brand of rhyming marked by timely punches, tenacious commentary, and true poetry. Originally from the Baltimore/Washington metropolitan area, Sintax now calls the Upcountry of South Carolina his home. He has been rapping for more than 15 years, in the booth and on stage. He considers himself a fan of rap music first and a committed artist second. He takes his responsibility to the style and content of hip hop culture seriously and wants to be a positive influence in it's movement among the youth around the world. He refuses to accept that popular music only has room for drugs, violence, misogyny, sexuality, and despair. There have always been, and will continue to be, men and women of vision and artistry who will stand to offer a contrasting message of hope. Sintax aspires to be counted among them.

Here's what you say about
Sintax the Terrific - Curb Appeal.