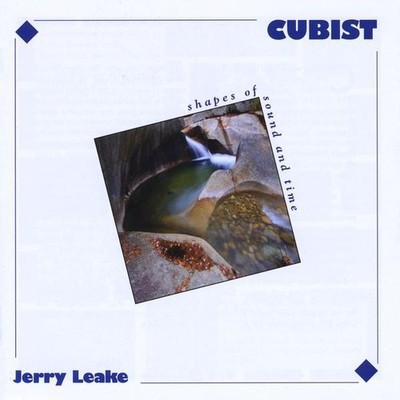 Jerry Leake's Cubist represents a groundbreaking direction in contemporary music, and additionally for that matter, ancient music. Leake, a dedicated researcher and student of African and Indian musical traditions, has been exploring for quite some time the possibilities of co-mingling those ancient traditions with modern influences of groove, ambient, rock, jazz, and more. This of course has been attempted many times before. The danger is that the result ends up as a fusing of superficial (surface) elements of musical styles. What sets Cubist apart is the depth of dedication and commitment to all of these disciplines represented not just in Leake himself, but in all of his co-conspirators on this project. What we have here is not so much a mixture of chemicals, but rather an entirely new compound, something that will take repeated listening to grasp, and a clear indication of the possibilities of "fusion" and "world" music in it's best sense. Intro from the CD: Cubism was a brief but significant art movement lead by Pablo Picasso between 1907 and 1914. Cubists represent objects in a single plane, simultaneously opening the object in all it's sides in relation to the observer. This multi-viewpoint treatment of a two-dimensional canvas revealed an intentionally ambiguous, fragmented image of reality. Cubism in music also exists: sound and time can be perceived from various viewpoints and centers of gravity. Combinations of sound elements (wood, metal, skin); culture and tradition (African, Asian, orchestral); odd metric structures and unusual subdivisions can open music in all it's sides for the listener. New angles in composition and arrangement unfold. Music can also be represented using geometric shapes: as vectors of sound in motion, as particles of musical thought. In South India the rhythm yatis are derived from the curl of a cow's tail, the barrel shaped mridangam drum, an hourglass of the damaru drum. North Indian rhythm cycles, math concepts of tihai and ginti, and African bell patterns can be realized as a compass, graph, or flowing waves. "Cubist" represents my third recording realized with the engineering, guitar playing, and compositional expertise of Randy Roos at his Squam Sound studio. Other friends and colleagues offered their musical perspectives that completed the unique geometry of each percussion sculpture. ______ The players: The CD also features the playing and composing talents of Randy Roos (guitars, engineer), Noam Sender (Turkish ney, zurna, duduk, and vocals), Mister Rourke (turntables), Rohan Gregory (violin), Derek Beckvold (bass sax & bari sax), Lisa Leake (vocals), and Ken Schaphorst horn arrangements played by Stan Strickland (tenor sax), Dave Harris (trombone), Mike Peipman (trumpet), Brad Hatfield (keyboards), Mike ('Micro') Rivard (e. bass), and Will Graef (guitar).

Here's what you say about
Jerry Leake - Cubist.