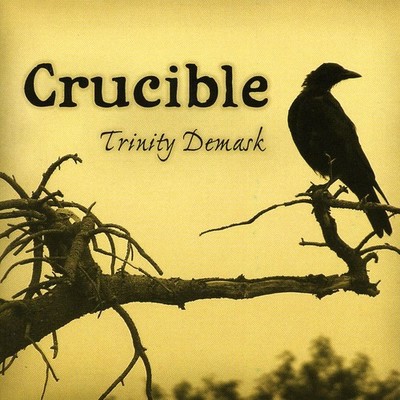 'Trinity Demask has one of those voices that gives your heart and spirit a double-take. Wonderful songwriting, great production. 'Crucible' is a gem!' - Wendy Wham, KUNC 91.5 FM Greeley, CO 'After a seeming eternity between releases, Trinity Demask returns under her own name, with an album's worth of material that places her squarely in the ranks of singer-songwriters like Dar Williams and Jonatha Brooke.' - Chris K., host of "The Colorado Sound" radio show (KRFC 88.9 FM, Fort Collins) The first thing that grabs you about Trinity Demask is her voice. Often drawing comparisons to the angelic, rootsy tones of Alison Krauss, Trinity's voice can also pack a powerhouse punch reminiscent of blues rocker Susan Tedeschi. It is a voice perfectly suited to bring songs to life with heart and passion. Trinity honed that voice singing to her pets as a child and alone in her car as an adult, but when it came to singing to a human audience, fear of rejection kept her silent. "By the time I made my singing debut, I was in my thirties. I had always written poetry and stories, so songwriting wasn't so much of a surprise, but my friends and family were shocked to learn that I had this voice that I'd been keeping secret. I've since discovered it's not uncommon for people, especially women who tend to nurture others and put their own desires last, to have shelved talents or dreams. Finally, they reach a point in their mid-thirties or later when they ask themselves, 'if not now, when?'" Trinity certainly has made up for lost time. She began performing professionally in 2001 just months after playing at her first open mic. From coffeehouses and bars to theaters and festivals, she steadily earned a devoted following who appreciated not only her music, but her disarming wit and humor. Her first CD "Venus In Retrograde" (released under her band name Third Road Home) was named "one of the best CDs of 2004" by the Indie Acoustic Project. Her bluegrass-infused tune "Whatever Is" was selected for the 2004 New Song Showcase at the popular Walnut Valley Festival and was included in mvyradio's Fresh Produce #1 CD Sampler. The introspective collection of songs was lauded by reviewers and listeners alike for it's intimate and conversational tone. "Listening to this CD is like a deep tissue massage, some lyrics hit hard, but it makes you feel released and strengthened in the end," writes one. A casual listen reveals accessible songs that are rootsy, warm and sometimes edgy, with catchy melodies and insightful lyrics. But it is her distinctive voice that captures the listener on a deeper level, delivering inspiration, hope, and healing. In her new release "Crucible," she explores themes of struggle, transcendence, and redemption with trademark clarity and heart. The twelve tracks range from upbeat country folk to moody adult alternative with topics spanning from the personal to the political. She doesn't shy from difficult topics or dark emotions, but neither does she dwell on the pain. "Even in the worst moments of my life, I've seen the bigger picture and that's the kind of message I convey in my songs. There's always a light of hope. Keep moving forward, keep exploring. Life is all about the journey. There's bound to be something unexpected and beautiful around the next corner." Trinity's optimism isn't blind faith. It's the voice of experience. From her own difficult childhood - she lost her father to cancer when she was twelve - to the lives of those she served while working with the homeless in Denver, Trinity has known hardship and heartache. But she found hope and healing in music. "Music has always been my closest companion and the source of my greatest inspiration. My path in life would be drastically different if I didn't have the soundtrack that I did. I owe those artists a huge debt of gratitude. Music should move your body, challenge your mind, open your heart, and expand your awareness. That's what I've found in the music that inspired me and that's what I strive to create with my own songs." It's that philosophy that makes Trinity Demask's music more than entertainment. It is songwriting at it's most empowering, expressed with a voice that purely and poetically shares the profound nature of being human.

Here's what you say about
Trinity Demask - Crucible.