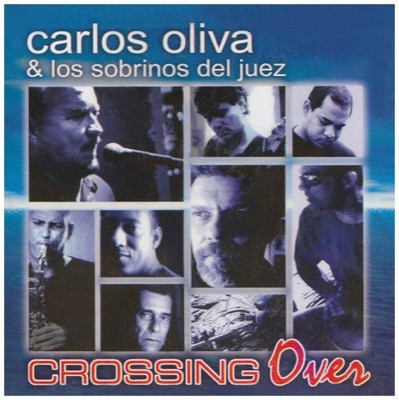 Carlos Oliva & Los Sobrinos del Juez new CD, Crossing Over, has English salsa versions of the pop and disco hits Celebration (Kool & The Gang), All Night Long (Lionel Richie), Can't Take My Eyes Off You (Frankie Valli), Get Ready (Rare Earth), Vehicle (Ides Of March), Rock the Boat (Hues Corporation), Play That Funky Music, White Boy (Wild Cherry) and You'll Never Find another Love Like Mine (Lou Rawls). The songs are fist performed in English and then in Spanish. Get your dancing shoes on! Musical director and bandleader, Carlos Oliva, formed his band, Los Sobrinos del Juez (The Judges Nephews), in 1967. He began by playing the drums and singing for the band. After developing a strong rapport with the audience, Carlos moved to the front of the band in order to be seen. Once there, Carlos played timbales and congas, and sang and talked to his audience. Fronting the band has become a full-time position for him. He became, along with Willy Chirino and Eddy Elmer the originator of the Miami Sound, Later made famous internationally by one of his pupils, Gloria Estefan & The Miami Sound Machine. To this day the band records and performs throughout the US and Brazil.

Here's what you say about
Carlos Oliva - Crossing Over.