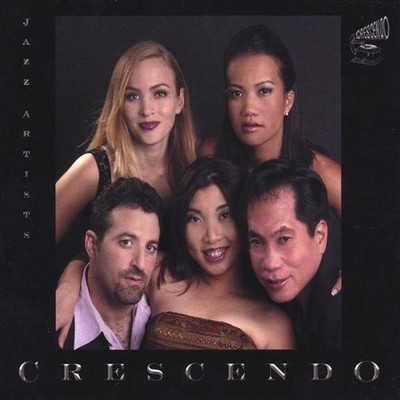 Expressed by the HAIRPIN sign , the term Crescendo is one of the most important effects in music. It's a direction indicating that the tone is to be gradually increased in loudness or force. Indeed, such has been the evolution of Crescendo since it's conception in 1998. Originally formed as an all-male ensemble, the group is now a mixed quintet composed of accomplished vocalists from different ethnic backgrounds and musical influences - a gorgeous reflection of America's cultural diversity. Combining the improvisation of jazz, the melodic accessibility of pop, and the Polish and discipline of classical music, Crescendo creates an elegant, lush, and sophisticated sound that's earned numerous honors, including thechampionship prize in the Crystal Palace Casino International Talent Search Contest (1999), the Virgo Award for Best Musical Group (2000), and the Celebrity Chronicle's Best Musical Artist Award (2001). Blessed with a magical 'blend' - that elusive match of timbres and vibratos that distinguish the Crescendo sound - the Hollywood, California-based group recorded their long-awaited, self-titled album throughout the autumn of 2003. Released in 2004, their debut recording displays the group's broad repertoire,ranging from Duke Ellington to Antonio Carlos Jobim, from jazz to blues, from blazing scat improvisations to heartfelt ballads. The ensemble's thrilling 15-track (plus a surprise bonus track!) CD is steeped in glowing arrangements, magnificent solo performances, and the kind of sublime harmony singing that has earned Crescendo favorable comparisons to some the finest vocal harmony groups on vinyl. Backed by a superb band that includes seasoned musicians who have toured with the likes of Barry Manilow, Donna Summer, and Cher, Crescendo presents fully choreographed concerts that leave fans exhilarated and satisfied. Look for Crescendo performing in your area soon. In the meantime, enjoy them on disc!

Here's what you say about
Crescendo - Crescendo.