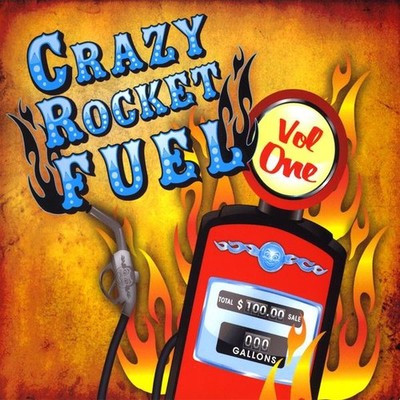 'If cornering the market on being an all woman, hyper-awesome, old school, sawdust on the floor Rockabilly band were illegal, the Milwaukee quartet, Crazy Rocket Fuel would most definitely be Taycheedah bound. All things considered, hearing their debut album Volume 1 and seeing these beautiful songstresses sing the tunes live are two totally different animals. Lead singer and guitarist Kari Bloom is sultry in every single way. From her platinum blond hair to her deep red lips, she can melt a crowd with surgeon-like precision. Backed by songwriter, singer and lead guitarist Ginny Wiskowski, Laura Proeber on the stand-up bass, and Debbie Bricault tanning the skins, CRF is more than just combustible, they are molten hot magma! But, I digress. These ladies deserve more than a one-man wrecking crew drooling over them and should have something that closely resembles an album review. Their album, Volume 1, was released in December of 2009. And for a lack of better words, it is sheer perfection. In the eyes of a die hard Rockabilly fan, these ladies belt out awesome honky-tonk inspired tunes like it's second nature. The album opener, and aptly titled, "Crazy Rocket Fuel" is a traveling bass line, get up out of your seat and dance kind of dream song. Following it up is the toe-tapping "Chevy Nova". The song takes a page out of the Reverend Horton Heat's retro repertoire. These ladies follow a recipe of traditional Rockabilly that would leave anyone hard pressed not to tap their toes to bouncy bass lines or purse their lips during a twangy lead guitar riff. The sound is traditional, but you can tell the lyrics are from an all lady band. Songs like "Ball & Chain" and "Smitten" have that woman's touch. Don't get me wrong, these ladies are all class and excellent performers. Having this album in my possession is a gift from God. "Oh Honey" has that lovers lament feel to it coupled with a swing dance touch. The catchiest song on the album (and my favorite to see live) is "Funspell." Nothing says a good time like witchcraft and honky-tonk! "Taycheedah Bound" is fun and tells the story of a woman fed up with her old man and "stabbing him with a knife." The album is rounded off with a singing cowgirl song "(Who My) Baby Daddy." Bloom and Wiskowski play off each other lyrically on "Daddy" with sheer poetic perfection. The idea from the song could have easily been inspired by watching too much Jerry Springer, but it's a great way to end a perfect collection of music. Out of a possible ten stars, these ladies get every single one. If I had four thumbs, they would all go up. My only request: MAKE MORE MUSIC!' ~Love, Peter Coffinail.