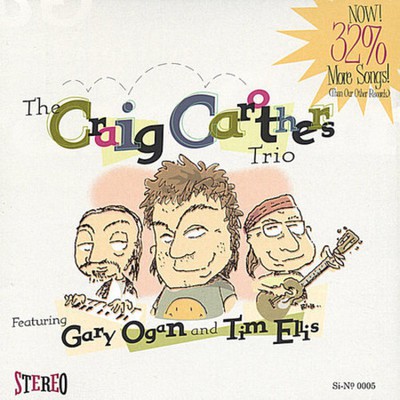 In the last three years alone he's driven 80,000 miles to play in more than 50 cities in 20 states. When you figure in the airplanes and rental cars, it adds up to a lot of scenery and a lot of songs. For Craig Carothers, the journey, and the songs, began in the Pacific Northwest. Craig's parents were both music teachers. Around the house, sounds ranged from Brubeck to Mancini; Victor Borgé to Jonathan Winters. Later influences included Motown, Joni Mitchell, Tom Lehrer, and The Beatles. Venues were plentiful around his home in Portland, Oregon, and Craig spent more than 20 years playing almost every night of the week inside a forty-block radius. During that time, he toured with or opened for a wide variety of acts: Mose Allison, Karla Bonnoff, Jonatha Brooke, Rosanne Cash, Bruce Cockburn, Paula Cole, Robert Cray, Catie Curtis, Crash Test Dummies, Donovan, Peter Himmelman, John Hiatt, Leo Kottke, Patty Larkin, Michael McDonald, Dennis Miller, Anne Murray, Danny O'Keefe, Leroy Parnell, Paula Poundstone, Boz Skaggs, Toad The Wet Sprocket, Richard Thompson, Jethro Tull, Romeo Void, Loudon Wainwright III, Tim Weisberg, David Wilcox, Warren Zevon, and many others. Things changed in 1995, when country music star Trisha Yearwood recorded Craig's song "Little Hercules." He hung a gold record on the wall and started traveling to Nashville on a regular basis. A publishing deal followed, and over the next five years his travels produced new performance opportunities as well. Soon, he had regular gigs in Nashville, Birmingham, Atlanta, Houston, and Little Rock. In 2000 he made Nashville his home. Trips back to the west coast started to include stops in San Francisco, Los Angeles, San Diego, Denver, Phoenix, and Salt Lake. In recent years Craig's songs have been recorded by artists including: Kathy Matea, Lorrie Morgan, Sons Of The Desert, Kate Markowitz, Andrea Zonn, Steve Seskin, Berkley Hart, and Peter, Paul and Mary. Quotes: " ...he excels at creating smart, memorable material and putting it across with abundant personality" -Birmingham News "...the right mix of weary-eyed cynicism and helpless hearted romanticism..." -Performing Songwriter Magazine "He has a voice that should be famous." -Patty Larkin "Who? Never heard of him." -John Prine Craig is now traveling the country in support of his new CD, "Solo."