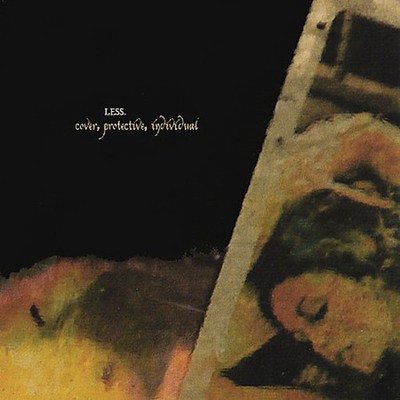 'For those who consider themselves too indie for the likes of Tool, yet invariably intrigued by darker, more smoldering avenues of rock, here's one of two options to consider: Either (1) Bite the bullet and just listen to Tool you silly snobs! Where's the shame in it? Or, (2) take the scenic high road if you insist and listen to the talented three-piece Less. This San Francisco based group offers a compelling variant of the bruised, righteous indignation typified by Maynard Keenan's vocals and Tool's steady, driving artillery of art-steeped instrumentation. The differences come subtly; the music touches upon influences of Radiohead and Godspeed You Black Emperor, both in composition and production, yet draws upon inspiration in Middle-Eastern folk. The songs 'Our Sin', and 'Melt Water' are steeped in this latter influence; their hellish harem-tents peaking upon ancient, fevered deserts, their lyrics compounding this atmosphere: 'Judas' lip my ears / kiss with the abuse of lullabies full of empty lies / today I went to let the others only see the halo / that I return with the empty hat of salvation / let my intellect be wrecked that I might expect resurrection / oh where have you gone?' The sinuous, bridged triptych of 'Buried in Sand,' 'Down on the Dead,' and 'All is Well' is by far the most impressive portion of Cover, Protective, Individual. It is a vocally subdued, delicately layered epic, pinched with quiet, abstracted sampling, and busy with Eastern incantations. Less would be wise to focus on this as their definitive direction into fame's uncertain fray. Indie-rockers would be wise to put down their pretensions and entertain this album for all it's worth.' - Leslie Henkel, Performer Magazine 'Cover, Protective, Individual consists mainly of lots of spooky Middle-Eastern tinged acoustic guitar melodies backed by bleak, droning, and equally spooky vocals. The percussion and other sounds are minimal and fitting of the dark Eastern vibe: a few occasional drum sounds, rattling on bells, occasional background electronics... This is slow-moving and absorbing stuff... The album's dark atmosphere is well decorated by the beautifully recorded acoustic guitars which are upfront in the mix and crisp enough for you to hear fingers scraping the strings.' - Alex Baia, leftofthedial.com 'Dark acoustic guitars fill each track of the second album from Less, COVER, PROTECTIVE, INDIVIDUAL. The sorrowful acoustic guitars that are very similar to that found in much of Latin music are accompanied with soft yet wounded vocals... This album is rich, mysterious, and sobering, much how life can be at times.' - Anthony, Skratch Magazine.

Here's what you say about
Less - Cover Protective Individual.