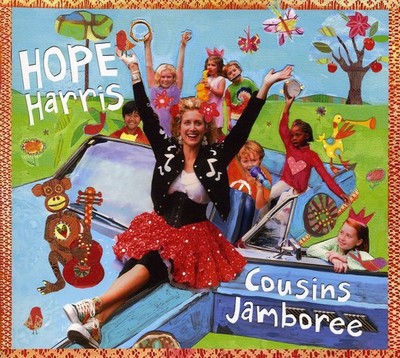 Songs from Cousins Jamboree, produced by Rob Friedman who among other projects is the co-producer of the Dan Zanes Family Albums, have live audiences dancing in the aisles! Rocking songs, silly songs, heartfelt songs, and soon-to-be sing along songs combine in this 16 track album of original songs and arrangements. Joined by an incredible group of talented musicians who include Doug Yowell, Jeff Allen, Wells Hanley, Ernesto Villa-Lobos, Elizabeth Bruce, Capathia Jenkins and Rob Friedman, Hope sings with infectious joy! Originally from Lynchburg, Virginia, Hope has appeared on stages big and small from the St. James on Broadway to the Bluebird Café in Nashville where she sang with legendary songwriter Don Schlitz. And these days, more often than not, you will find her surrounded by children whipping up her own brand of contagious theatrical, musical fun. According to Hope, it was less her training as an actress and her experience teaching music at the Sunshine Kids Club in New York City than it was her self-imposed training in the 'backyard' that lay the groundwork for her energetic, interactive concerts. 'As a child, I created and directed elaborate variety shows starring my baby brother, my little cousins, family pets, stuffed animals and lawn furniture. They were all a unique distillation of 'The Carol Burnett Show', 'Sonny and Cher', 'That Girl' and 'Peter Pan'...I destroyed many a nightgown 'in flight' off the porch!" A graduate of the University of Virginia, and later the Neighborhood Playhouse School of Theatre, Hope worked on Broadway, Off Broadway, and in Regional and Stock productions. While working in theatre with renowned Broadway writer/producer Frank Wildhorn (Jekyll & Hyde, Scarlet Pimpernel, Civil War), Hope also recorded her original children's lullaby project, Julie the Starfish and Other Lullabies, an ethereal blend of voice and guitar. Co- created with JR Getches, it was dubbed an "instant classic" by parents and has been called "the Magic CD" which from the first note relaxes the entire family. And with the arrival of her two sons, came new inspiration and a strong need to keep them entertained. Songs from her latest release, Cousins Jamboree, have audiences singing all the way home! As witnessed by preschool director Terry Tusing, "Hope has the ability to engage the entire audience--children as well as adults. She is energetic, upbeat and truly enjoys entertaining children. She puts on a program that you never want to end!" In between writing, recording and performing with her band, for the past three seasons, Hope has been a contributing scriptwriter and starred as Baker Bobbie in the acclaimed Chocolate Chip Chamber Music Series in Park Slope, Brooklyn. Recently, Hope and her husband moved with their two boys to Richmond, Virginia. But at the end of the day, she admits her most challenging gig is chasing her 'NBA team in the making', sons Beckett and Preston, around the kitchen without eating the cupcakes on the counter!

Here's what you say about
Hope Harris - Cousins Jamboree.