Rob Heath - Couple of Times Round the Sun 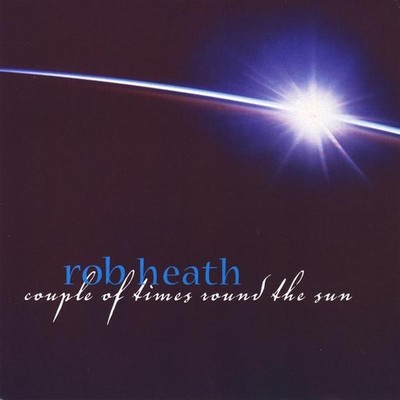 Rob uses words to paint pictures in the hearts and minds of his audience creating an emotional experience for each person as his music breathes life into every character. His accolades include the Canadian Radio Music Award for songwriting and the prestigious New Folk Songwriter Award from the renowned Kerrville Folk Festival whose alumni include Lucinda Williams, Lyle Lovett, Shawn Colvin, Steve Earle, Tom Russell, and Nancy Griffith. He's written for Glen Campbell Music, Don Goodman Music, and Criterion/Atlantic Music (publishers for Rodney Crowell, Roseanna Cash and Lyle Lovett) and has had cuts with various artists as well as top forty songs of his own. Rob's fourth CD One More Day Above Ground is here and surpasses all expectations. He's working again with Louis Sedmak, who's produced many award-winning songwriters including Jake Matthews, Duane Steele, the Poverty Plainsmen and Ian Tyson. While keeping to a roots format, Rob's album again offers the variety that we have learned to expect - a well-conceived intelligent and lyric-driven blend of folk, country and pop. The title track and first single, One More Day Above Ground, is another day in the life of a bar keeper who has seen it all, heard it all and is just grateful to have "One More Day Above Ground". Once again, there are also songs that will touch your social conscience such as "Starlight Tours" and "What If They're Right" and those that just make you feel good like "Mystery of You". After recording the guitar-vocals for the album, Rob and his producer (Louis Sedmak) then got the players they wanted from not only Edmonton but Calgary, Vancouver and Nashville to record with them in real time over the Internet using a new piece of software that allows them to hear and talk back to the players who are thousands of miles away. It's as if the players were in the next room without having to get on a plane to be there (spending downtime in a hotel room). Because they started with keeper guitar-vocals it forced the players to conform to Rob's arrangements of the songs, so they've gotten closer to his original concepts than has been the case on previous albums. Technology is a wonderful thing. We are now getting a lot more for a lot less. About his latest, Rob says, "This album at first blush may feel like a mixed bag. What connects these songs is that they are all stories. The title track "One More Day Above Ground" is a reminder to myself that no matter how bad life can seem from time to time it's still much better than the alternative. Overall I am optimistic about us although sometimes it's hard to understand the things we do to each other. If there's a message here it's that having faith in ourselves is our only hope." Rob's previous CD A Couple of Times 'Round the Sun, also produced by Louis Sedmak, is a well-crafted offering that, while down to earth, has depth and understanding. It was well received by Americana and Triple AAA radio in the US and got significant rotation on country airwaves in Canada as well. In addition the album was played on over 200 stations on six continents around the world. He says, "My last album was a collection of some of the darkest songs I wrote while under contract to Nashville publishers, songs I loved but didn't think would ever get cut by other artists. This album, although sporting a couple of sad songs, has a more up feel overall reflecting probably where I am now and where I think my life is going." Rob's performed his songs from Nashville to Austin to L.A. with his most recent appearances being at the WCMA's and the Arts Touring Alliance of Alberta. One More Day Above Ground adds 11 new songs to an already impressive repertoire which captivates audiences and keeps them coming back.

Here's what you say about
Rob Heath - Couple of Times Round the Sun.