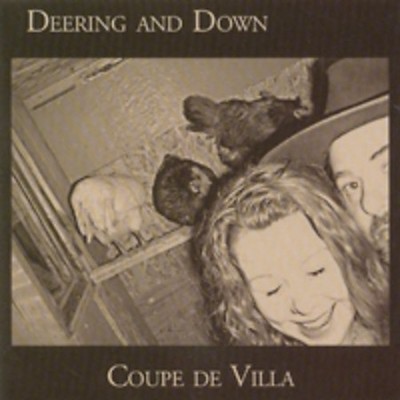 Had Lahna Deering and her big voice been looking for the most expedient route to stardom, she would likely never have settled in a small town in Alaska. As fate would have it though, at the age of only sixteen, Deering did find her way up north, where she met and befriended rock and roll veteran The Reverend Neil Down. And using the town of 500 year-round residents as a base, Deering, now 21, and Down recently wrapped up a winter's worth of work on their first album together, Coupe de Villa. In Rev Down, Deering has found more than just a producer - she's found a musical companion. While Deering's strong 'belt-it-out' voice and Down's 'left of center' lead guitar are the constant in the 9 tracks on Coupe de Villa. 'It's kind of like Little Red Riding Hood meets the Big Bad Wolf,' said Down, noting that Coupe de Villa is the fourth album produced by Burn Barrel Records, that was conceived, recorded and produced in Alaska and the Yukon Territory. 'The emphasis here is the music,' Down said. 'It's pretty hard to get caught up in all the hype and 'outside noise' that can attach itself to making an album, because up here during the winter, there is no hype - there is no noise.' Deering, who spent three summers in the north before braving a winter there, worked as a maid for a local hotel, a jewelry salesperson for a trinket shop and a cast member for a daily stage performance. Then she found her niche as Miss LaLa, a 'madam' who dresses in scantily clad costumes and entices visitors with her attitude and her voice as a part of a recreation of a gold rush trail camp. Deering and The Rev -- who lists in his resume musical encounters and friendships with such legends as Jerry Scheff, Henry McCullough, and Albert Collins -- both insist that the difference in their ages has never been a hindrance in their attempt to turn out strong music. 'She's 19 going on 35; she's an old soul,' Down said. 'There's a synchronicity thing there. She likes sixty-five Lincolns, and I like sixty-five Lincolns.' 'Everything he has done to the songs I have written has blown me away,' Deering said. 'When he took my first song, 'I Need a Change,' and I heard the awesome variations that he threw into it . . . I could never have imagined something that cool being done to that.' 'I heard The Rev playing my first summer I was in Alaska,' Deering said. 'My mom and I were taking a walk one night, and we heard his music out on the street. We started dancing right there on the Boardwalk. He's a maniac' The musical duo admits one challenge that Deering's age has posed. At nineteen, alcohol control laws prohibit her from entering any of the bars or clubs in Alaska that feature live music. As a result, Deering has performed short sets from the Boardwalk outside of some local establishments and utilized visits from her mother to perform. Last summer, One sign in the window of a local bar read 'Tonight only. Don't miss it. Lahna's Mom is in town.' 'Everyone knew what that meant,' Down said. 'The place was packed.' Deering said that working on Coupe de Villa and being allowed to play gigs in Canada, where the legal drinking age is 19, has helped alleviate the problem. 'Now that I have something to focus on, I think this year is the first year that I haven't been bummed out about not going into the bars and getting to listen to and play music.' she said. 'I was always standing outside listening to people play music in the rain and the cold. Dancing in the street.' If Coupe de Villa is any indication, Deering will not find herself outside the music scene looking in for long.

Here's what you say about
Deering & Down - Coupe de Villa.