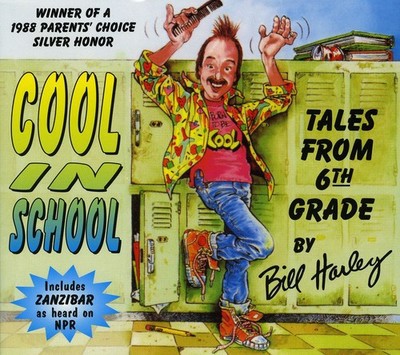 "Bill Harley has the uncanny ability to reaffirm life for listeners, be they five or fifty. Humor, empathy, intelligence and reality all radiate from his work and from him." - Penguin Books A Grammy award winning artist, Bill uses song and story paint a vibrant and hilarious picture of growing up, schooling and family life. His work spans the generation gap, reminds us of our common humanity and challenges us to be our very best selves. A prolific author and recording artist, Bill is also a regular commentator for NPR's All Things Considered and featured on PBS. Harley joined the National Storytelling Network's Circle of Excellence in 2001 and tours nationwide as an author and performing artist. With these considerable talents, Bill considers his real work to be using these skills to encourage his audience to see the world anew and to experience "live art", to honor the emotional lives of children and adults and finally, to pass along a love of language and music. "Bill Harley takes his life and turns it into art. Sounds simple until you actually try to do it. That Harley's art seems so effortless only underscore his mastery." - Nuvo Newsweekly Praise for Cool in School: 'Like Garrision Keillor and the writers of The Wonder Years, Bill Harley has a knack for nostalgia. This is a rarer talent than you might think. Nostalgia is easy to do poorly---anybody can get a laugh by listing the fads of his youth, now grown trite and ridiculous---but it's almost impossible to do well. Reminiscing about his '60s Indiana childhood on Cool in School, Harley usually manages enough insights to make his memories more than merely cute. At their best, the two stories on Cool are essays on the pitfalls of adolescence. 'Forget That Girl' is redolent of the mid-1960s---it's title comes from a Monkees song---and rich with detail. While reliving his own elementary-school heartbreak, Harley takes off on such customs as exchanging I.D. bracelets and the absurdity of sixth-graders going stead. 'There was the problem of talking to the person you were going steady with, but I figured I could deal with that...' This is a story of public humiliation, puppy love, and the secrets of being cool. It will make sixth-graders realize that they're not alone in their misery, and it will remind parents that youth is not always carefree. The second story, 'Zanzibar,' takes on the interrelation of homework, procrastination and creativity. Harley tells the story of the first song he ever wrote---in desperation, to hoodwink a teacher into thinking he'd done his homework when he hadn't. And what is art but a charming lie that fools the grown-ups? A-' Entertainment Weekly.

Here's what you say about
Bill Harley - Cool in School.