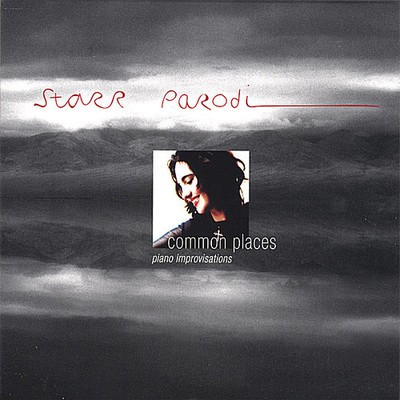 COMMON PLACES is chosen as CD Of The Year Whisperings: Solo Piano Radio, one of the world's most popular internet radio stations has selected COMMON PLACES as it's first ever "CD of the Year"! 'This deeply passionate and beautiful recording is one of the best albums of the year.' - Chris Douridas, Grammy nominated host of KCRW's 'New Ground' "Parodi's pianistic sense and delivery go way beyond creative. Words that come to mind while listening to Common Places include imaginative, courageous, dynamic, passionate, gutsy, pensive, restrained, and euphoric. I'm thoroughly entranced by the whole experience."- Mark Vail, Keyboard Magazine "A stunning new album." - MI6: The Home of James Bond 007 "Unexpectedly refreshing...interesting original melodies and energized interpretations." - Jeff Berkwits, Illinois Entertainer "Her performance and interpretations are innovative and yet classic and this is definitely a CD I will be playing for years to come." - Gemma Dempsey, KCRW Music "Parodi's improvisation is lovely." - John Sunier, Audiophile Audition "Common Places is anything but common and listeners who take the time to pay attention will not be disappointed."- Sari N. Kent, The Celebrity Café "Powerful, romantic, visual, engaging, imaginative and dynamic -- it is an album in touch with the soul of the piano and upon listening will touch you in yours. Essential!" - Mike Sargent, WBAI Niteshiftz "Starr Parodi's style is both innovative and unique. You can really feel the emotion in her playing. She's a class act." - Mark Gordon, KXLU Center Stage "Her enthusiasm for her music is apparent, and the music is energetic and original." - April Adams, KSFR Soundtrax "Fantastic!" - Alice O'Neill, Hollywood Behind the Scenes ------ Inspired by a deep relationship with her 1928 Steinway grand piano that once adorned the legendary MGM sound stage in it's most glorious era, Starr Parodi's new CD 'Common Places' echos with neo-classical, americana, gospel and cinematic themes all played as 'stream of conciousness' improvisations. Composer/pianist Starr Parodi is probably best known and recognizable as the talented funky multi-keyboardist that appeared nightly on the groundbreaking late night hit 'The Arsenio Hall Show'. She is also well known in the television and film industries for her music scoring abilities as one half of the Parodi/Fair partnership. She recently scored the 2006 critically acclaimed film 'Conversations With Other Women' (Helena Bonham Carter/Aaron Eckhart), High Roller: The Stu Ungar Story (Michael Imperioli), and the hit Lifetime Show 'The Division'. Her music has also been included in film trailers for many of Hollywood's biggest films including The Last Samurai, X-Men 3, The Last Holiday, War of the Worlds, Mission Impossible, Failure to Launch, Everyone's Hero, Akeelah & The Bee, A Good Year, Flight 93, etc... Continuing her multi faceted musical journey, Starr has returned to her touchstone and first love - the piano, for an intimate solo recording of spontaneous and uncommon improvisations on themes. Included in the collection of 10 songs, Starr has recorded a completely new version of the classic James Bond Theme. This piece especially ties into Starr's musical history because along with her production partner Jeff Fair, she arranged/produced and performed one of the most popular James Bond themes ever, heard in the trailers for Goldeneye, The World is Not Enough, Tomorrow Never Dies & Die Another Day and featured on the Capitol CD, 'The Best Of Bond ... James Bond', recently garnering her a gold record. The CD grew out of a spontaneous recording of the title song 'Common Places'. 'I had just finished recording another project and happened to have the mic's up and ready to go on the steinway. I was doing some chordal improvisations while watching the poetic movement of the sycamore trees in the canyon outside my studio window. As the santa ana winds kicked up I felt a well of inspirational emotion inside and just started to play. Over the next few months the other 9 songs on my CD followed in this spirit and fashion.' 'Sometimes I sat down with every intention of playing one idea I had in mind and ended up playing something completely different and opposite of my original intent' All the sounds on this CD were originally created on the piano. 'After recording the basic improvisations, Jeff Fair & I started experimenting with creating a new sonic palate using only the piano but effecting it with various filters and other devices. Sometimes the effect was ambient, sometimes percussive & many times subliminal. I loved adding these textures to the improvisations because they broadened the musical voice of the piano and added additional emotion and interest to the performances.' While listening to 'Common Places' it's easy to understand why Starr has accompanied such a stellar array of artists including Al Green, Mavis Staples, Celine Dion, BB King, Seal, Jimmy Cliff, Phil Keaggy, George Howard, Patti LaBelle, Carlos Santana, Phil Collins, Marilyn McCoo among many others. She also was asked to play keyboards at the Kennedy Center for the inauguration of President Clinton, and performed as an artist at Keyboard Magazines' 20th Anniversary concert in which 20 of the world's top keyboardists were invited to play. 'I recorded this music purely out of joy, purely out of sorrow, purely out of a longing and a searching, a peacefulness and restlessness. These are the common places we all share.'

Here's what you say about
Starr Parodi - Common Places.