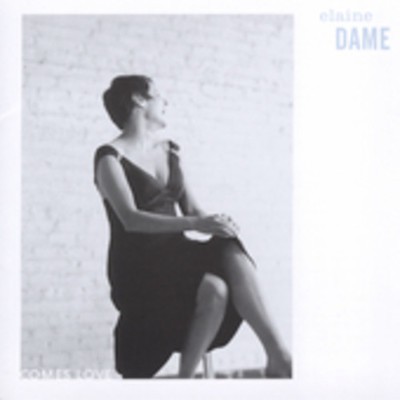 A few words from Neil Tesser, co-host of NPR's 'Jazz Review' ~ The Dame stands straight up at a microphone, like she owns it - or rather, like she co-owns it with her onstage collaborators. She sings with confidence and craft, letting her upper register swell open with a cocky confidence, but she doesn't overdo it; same thing with that vibrato, now slight, now thrilling, perched between jazz and Broadway - between Ella Fitzgerald and Ethel Merman. And this is perfect: she also plays the flute, the classic symbol of musical breeding among the royalty of old. Elaine Dame calls her e-mail newsletter 'The Dame Around Town,' and why not? The word's original definition is 'a woman of rank, station, or authority,' and the Dame's musicality places her immediately in that echelon. Sure, the word assumed a slangy, tongue-in-cheek familiarity in the 20s, immortalized by Rodgers & Hammerstein in South Pacific ('There Is Nothing Like A Dame'); but even there, it carries a whiff of distinction, a sense of respect for the neat mix of down-to-earth fun and elevated class. This fits, too: just listen to her splendid version of 'From This Moment On' by Cole Porter (whose best songs, not incidentally, also alloyed grit and gold). Dame comes honestly to all this - from the homework of improvising to the hard work of performing, to the infusion of a little Broadway glitz. Raised in Stevensville, Michigan, she got to jazz pretty late, having studied theatre and classical voice and flute in college, first at Pepperdine University in Malibu (California), then down the road a bit at UCLA; she ended up at Cal State Northridge, by which time she'd switched her major to theater arts exclusively. And then she settled into the routine of aspiring actors everywhere, working as a restaurant manager at night and auditioning during the day. 'I stayed in L.A. for ten years,' the Dame recalls, 'and I grew more and more miserable there. I'm a midwestern girl at heart, and Chicago is such a great city, with neighborhoods, culture - and public transportation! And I wanted to do theatre.' She moved to Chicago in 1992 and spent the next several years doing just that - 'work during the day, rehearse all night, perform the play for a few months, and then start rehearsals for a new one two weeks later' - before admitting that, 'you can't make a living doing non-equity theater.' Of course, to make a living as a jazz singer doesn't come easy either. But in the late 90s, she explains, 'I started reading a book called The Artist's Way. It's seminal for creative people of all types, and it helped me realize that what I really wanted to do was sing. I can't remember exactly how that happened, but I suddenly started inundating myself with jazz singers. I think I bought literally 100 CDs almost at once. Ella, Carmen [McRae], Sarah [Vaughan], of course, but also Blossom Dearie - I think her phrasing is sometimes really interesting - Nancy Wilson, Dinah Washington, Dee Dee Bridgewater, Dianne Reeves, Jackie Allen and Karrin Allyson.' That list casts a pretty wide net, from the music's hallowed divas to adventurous newcomers, but on this disc, most of which was recorded in 2002, you can hear the results of such catholic listening. Dame sings with the rich, booming power of a theatrical performer, but she inflects it with the sounds of jazz: the ensemble cooperation on lovely but durable arrangements; the small but telling melodic paraphrase of the original melodies ('You're The Top,' 'Ticket To Ride'); virtuosic ornamentation (check the verse to 'How Long Has This Been Going On?'); the subtle rhythmic displacements that separate a swinging, soaring Dame from correct but flightless cabaret renditions of the same tunes. None of this would work half as well without the benefit of the Dame's vocal instrument. Like clarified honey, her voice combines a hearty sweetness and a welcome translucence, and they enjoy a complimentary balance, reminiscent of Laurel Masse and Wesla Whitfield - two other singers who express unique vocal personae. But Dame can also push into unexpected territory, as she does on the album finale ('Comes Love'): a place in the heart toughened by life and strengthened by hope, with a little growl to signify both. As to what's next for the Dame, around Chicago or anywhere else, she's answered that question herself, with the very first tune on this disc. In the years since recording these tracks, she has met her self-imposed challenge to become a fully improvising vocalist: these days, she offers even more of the savvy melodic license unveiled here, and plenty of terrific scat soloing as well, pushing into the realm normally traversed by accompanying hornmen. (Listen to her scat solo on 'Yesterdays' to get a sense - but only a sense - of what she does now.) If you live outside Chicago, you'll have to wait for the next album to hear the impressive progress in her work; if you get to hear her on stage - at The Green Mill or Pops for Champagne or Katerina's or the famed Pump Room - you'll walk away marveling at the strides she's made in a short time. Either way, for Elaine Dame the best is definitely yet to come. Neil Tesser Co-host 'Listen Here,' The public-radio jazz review.

Here's what you say about
Elaine Dame - Comes Love.