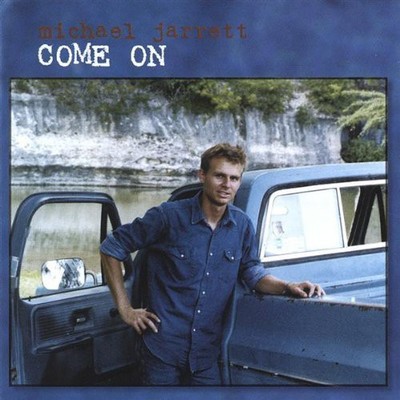 The first time I saw Michael Jarrett play was at a songswap at the Cheatham Street Warehouse in San Marcos, TX. A friend had dragged me there to hear one of her favorite songwriters. Michael was on the stage tuning his guitar when we arrived, neither of us had heard of him at the time, he was the 'new guy' in the three person swap. He sang his first song with his eyes closed and his feet alternately tapping. I couldn't be sure if he was trying to remember the words or just watching the events unravel in his head and then telling us about them. Either way, I knew what he was talking about. I had been there, or somewhere close, and I had now found the newest addition to my eclectic list of favorite songwriters. Michael's been playing around Texas, the Southeast, and the Southwest for about a year now with equally good acceptance from all over. Originally from Columbus, GA, he went to a small school in southeastern Tennessee where he began playing music and writing songs. For the past five years though, he has been travelling around, working jobs here and there, collecting images and stories and translating them to song. Press and fans have compared his writing to Townes Van Zandt, Guy Clark, Leonard Cohen, John Prine and Arlo Guthrie. But there is some definite element to Michael's songs that is uniquely Michael Jarrett... some spiritual element. His lyrics, the strength of his songs, pour out as poetry that feels nearly like conversation. Phrases seem to show up at just the right places so that the listener knows exactly what it is that Michael is seeing. Then he continues to take you down the highway with him to meet the people he's met, and see the places he's seen, and know a little of the feelings that are there, but, to feel them in your own way. It is Michael's willingness to be vulnerable about his life and his faith that is one of the biggest reasons fans seem to be drawn to his songs. These songs have created a varied and loyal group of new listeners. Those who have seen him play, remember a too tall, too skinny, funny talkin', Georgia boy in loose fitting Wrangler's telling stories about songs you might call folk, but you'd probably call it something else. I don't know what though.

Here's what you say about
Michael Jarrett - Come on.