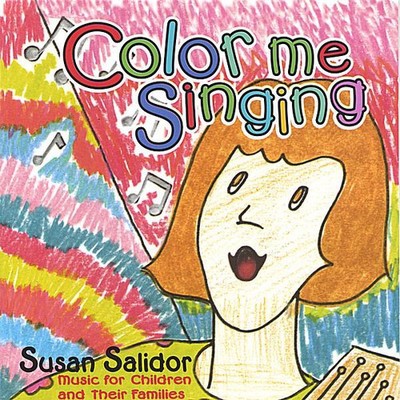 Susan Salidor's Biography Susan Salidor is an award-winning children's music composer, performer and teacher. Her five recordings for children and their families enjoy a national audience of young and old alike and have garnered a long list of prestigious awards. Little Voices in My Head (1995)was Susan's first release of mostly original songs and was honored with an Oppenheim Toy Portfolio Gold Award. The Chicago Tribune called Little Voices 'a gem of a recording.' Susan Salidor: By Heart (1996), Susan's second release, was honored with a Parents' Choice Gold Award for Excellence and received unanimous praise in the Chicago Tribune, Nashville Parent, Parents Magazine, ALA Booklist, and Family Fun Magazine, which called By Heart 'an album to savor. Color Me Singing, Susan's third kids' recording, was released in December 1998 and was chosen as a selection in Book-of-the-Month Club's Sound Review Catalog, which reaches an estimated 1.6 million people monthly. Color Me Singing received a 1999 Parents' Choice Gold Award, an Oppenheim Toy Portfolio Platinum Audio Award 2000, as well as a 'Listen Up' Award from Publishers Weekly. Susan's fourth release,'Shiny New Shoes,' is a double award winner with a Parents' Choice Silver Award and one from The Children's Music Network for Best Recording. Susan is the recipient of several ASCAP (American Society of Composers and Publishers) Popular Awards for songwriting. Her original song, Color Me Singing, is featured in a primary school textbook, Making Music, published by Scott Foresman/Silver Burdett. In addition, Susan's recordings are recommended in The Best of Everything for Your Baby (Krantz/Exley; Prentice Hall), and her song, 'Ruby B.,' appears in Ruby Bridges' autobiography, Through My Eyes (Scholastic Press). Susan's work includes family concerts and teacher music workshops at schools, libraries, colleges, theatres, children's museums, music festivals and bookstores throughout the country. Susan's fun and interactive music workshops, Sure-Fire Hits for Preschool Teachers and Sure-Fire Hits 2: Just the Songs, are popular at professional conferences nationwide. A companion training tape/CD and booklet is available under the same name. She served as an 'Artist in Residence' for the Rockford Public Schools' Early Childhood Program from 2000-2002 creating music workshops and working as a teacher/mentor. In addition, she has collaborated with husband Jay C. Rehak on a show for children, Noah's Ark: The Musical. In 2000, Susan joined forces with Chicago storyteller Dot Kane to produce an original story/song concert ('The Dot and Susan Show') geared toward preschool and elementary school audiences. She recently published a songbook with an accompanying compilation CD of thirty original songs called The Susan Salidor Songbook. In December 2003, Susan released her newest commercial recording, Come and Make a Circle: 20 Terrific Tunes for Kids and Teachers. In May 2004, Come and Make a Circle was awarded an iParenting Media Award. This summer, Come and Make a Circle was given both a Parents' Choice Award and an Oppenheim Toy Portfolio Gold Award, making this recording the most honored of all of Susan's CDs. Two of Susan's original songs are featured in a compilation CD of Chicago's best children's entertainers produced by Chicago Parent Magazine entitled Singin' In the City: Children's Music Chicago Style Vol.1. All of Susan's recordings and teaching materials are available through her website at www.SusanSalidor.com. Contact: Susan Salidor, 2225 W. Berwyn Avenue, Chicago, IL 60625 Phone: (773) 271-5568 FAX (773) 271-5581 Email: [email protected] Website: www.SusanSalidor.com.

Here's what you say about
Susan Salidor - Color Me Singing.