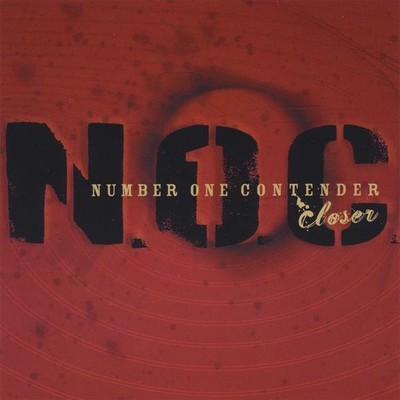 '9 out of 10' ~ Tunelabmusic.com 'A+' ~ The Post and Courier' A breathe of fresh air for Rock Music!! Produced by Eric Bass (Shinedown Bassist) Mixed by Skidd Mills (BB King, Saliva, Saving Abel) **Grammy-Award winner** Artist Information Instrumentation Reid Johnson- Vocals Alan Price- Guitar, Vocals Damon Jackson- Guitar Jonathan Holt- Bass Guitar Paul Huck- Drums Biography Energetic, edgy, and intelligent Rock with brilliant melodies and beautiful harmonies. Some moments reflect the likes of Led Zeppelin, Nirvana, Pearl Jam, and the Red Hot Chili Peppers. Powerful, uplifting vocals with a generally positive influence. Songs for fans of any type of music and any age or walk of life. When the term Number One Contender is used in any scenario, it points to someone or something determined to be the best. When the five members of NOC came together in late 2005, they have been nothing but determined to write the best songs, play the most intense live shows, and make powerful connections with fans of all ages and walks of life with their original, yet familiar brand of Rock and Roll. NOC released their debut CD "The Album" independently, within months of their inception and after being chosen by BMI listeners as one of the top new artists in a nationwide Podcast Contest. The band toured throughout the eastern US in support of "The Album" receiving support from regional radio stations, gaining fans across the globe, and landing their debut single "Pistola" on Midway Games "Blitz the League" video game for sony psp alongside Korn, POD, etc. In October 2008, NOC celebrated the release of their newest full-length CD "closer" to A+ reviews. "closer" is the culmination of over one and a half years of hard work. After writing over thirty songs and delving deeper into the soul of their band, NOC sought out Eric Bass (Shinedown Bassist), to produce the new album. After several months of tracking, the band found Grammy-Award winner Skidd Mills (Theory of a Deadman, Saving Abel,Saliva,BB King) and recruited him to mix and the Brad Blackwood (Fuel, Lucero) to master and wrap the project up. With the ever blurring lines of the Rock Genre, NOC fits in comfortably, yet stands out, with an undefinable original style and sound. Each of the five members brings their own individuality and influence into all aspects of NOC with a sound that steps away from the clichés of modern rock radio while embracing the stylings and essence of their favorite bands. Number One Contender has shared the stage with many various artists including, Shinedown, Saving Abel, Dark New Day, Papa Roach and many others. They are poised to take their determination and focus to a new level with the new CD "closer" and vow to make their name and their original sound, familiar worldwide. They strive to be a refreshing new face in Rock Music.

Here's what you say about
Number One Contender - Closer.