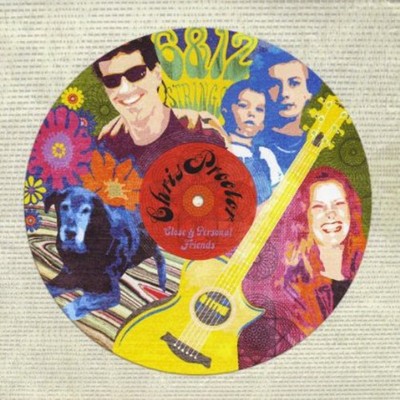 Chris Proctor's new CD, 'Close and Personal Friends,' takes us back to Chris's roots, and unfolds a tapestry of medleys woven from the music from his early years. Each of these medleys is an organic whole, the pieces knit together with introductions and bridges that Chris composed to order. 'For What It's Worth,' Stephen Stills' anthem to the 60's protest movement, glides seamlessly into 'Spooky,' the 60's pop/soul nugget from the Classics IV, which then evolves effortlessly into Marvin Gaye's much-loved 'Heard it through the Grapevine.' One surprising and delightful marriage merges the Beatles, Lynyrd Skynyrd, and Paul Simon, and another pays homage to an obscure Brit guitar hero from the '70's. Some medleys focus on classic rock and pop, while others incorporate soul, folk, British Isles and music from Chris's parents' era. You'll hear echoes of Trini Lopez' Caribbean pop hits, a classic from Oklahoma, the theme from the Pat Boone/Debby Reynolds movie, 'Tammy and the Bachelor,' and two intriguing compositions from little-known but much-admired Brit guitar hero Dave Evans. Always on display as always is Chris's taste in selecting memorable melodies, the compositional and arranging skills with which he builds the introductions and bridges, and the crystalline guitar technique with which he bring each piece to life. Some highlights of 'Close and Personal Friends'- The opening harmonics and bass line of the Stephen Stills classic, 'For What It's Worth,' which conjure up the stirring original; -The eBow introduction to the traditional jig medley, which evokes bagpipes swirling about the Scottish mists; -The melodic twists and turns, and newly-composed bridges in his 5-song Beatles/Donovan confection; -Another rock/pop medley which concludes with a stunning solo guitar version of 'You Can Call Me Al,' Paul Simon's rave-up hit from 'Graceland,' complete with the original's 3-part harmony horns and echoes; -The lilting partnership of 'Corrina, Corrina' and 'People Get Ready' which closes the recording on a beautiful 12-string harmonic fade out. Warm musicality, great taste, stellar technique, quirky humor, complex arranging and consummate composing chops all shine through this recording. LIke the subject matter and title, the guitar sound is also close and personal- just a single guitar, top-drawer microphones and preamps, and an intimate, pristine digital environment. Of course, the CD has treats for guitar aficionados as usual- Chris's colorful palette of 6- and 12-string Taylor guitars, unorthodox techniques, alternate tunings, partial capos, unique eBow use, and slinky slide work. 'Close and Personal Friends' is Chris's tenth solo project since his touring career began with his National Fingerstyle Championship win 3 decades ago. It completes a circle of sorts, taking his longtime focus on composing new music for guitar, and using it to build a sound sculpture of homage to the sources of that originality. It's a lighter, more accessible work as a result, and a listening treat for both existing fans and those who have never heard his music before.

Here's what you say about
Chris Proctor - Close & Personal Friends.