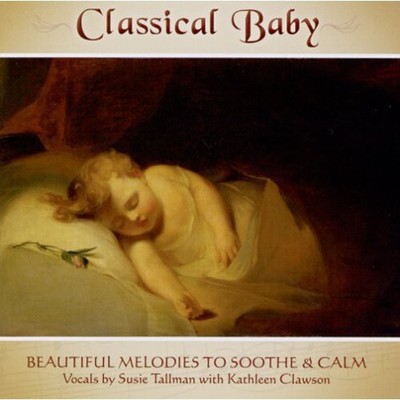 Classical Baby from Rock Me Baby Records, introduces beautiful, soothing melodies to both parent & child, by some of the most important classical composers including, Mozart, Bach, Beethoven, Debussy, Dvorak and Brahms. This CD has songs sung by Susie Tallman & Kathleen Clawson as well as 4 instrumentals. Rock Me Baby Records has been producing lullabies, nursery rhymes & children's songs since 1999. As a classical trained singer from UCLA, the New England Conservatory of Music, and the San Francisco Symphony Chorus, Susie Tallman wanted to provide a CD of classical music for her audience of parents who are interested in exposing their children to a wide variety of music in order to calm & soothe their children as well as educate; by exposing the parent & child to various languages (German, French, Italian, Latin, Czech, Dutch) and instrumentations (string quartet, piano, harp, choir, organ). American mezzo-soprano Kathleen Clawson is consistently praised for the burnished, bronze beauty of her voice enhanced by an innate musicality and a persuasive, sensuous manner of communication. She has appeared throughout the United States in opera, on the concert stage and recital platform in a wide range of repertoire from Bach and Janacek to Verdi and Wagner. Finally, it is important for Rock Me Baby Records to provide music that is not simplified for children, but authentic and true. Having said that, we have taken liberties in adding English to songs or a simple melody where only instrumentation would have occurred, or arranged the piece for string quartet rather than a full orchestra, but all the time, thinking about our audience. Thank you for listening and we hope you enjoy the music.

Here's what you say about
Susie Tallman - Classical Baby.