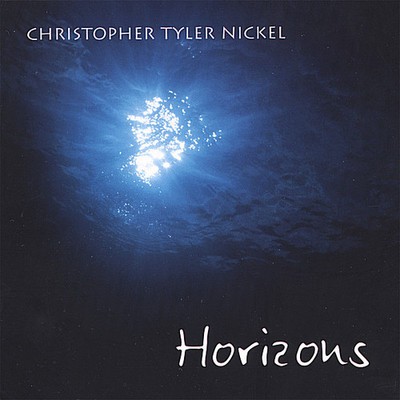 "Horizons" marks the first album release from concert and film composer Christopher Tyler Nickel. Performed by the acclaimed City of Prague Philharmonic Orchestra and Chorus, the music is immediately accessible with it's beautiful melodies, dramatic sweeping themes, and powerful orchestrations. This CD also features two beautiful flute solos performed by Jack Chen. From the epic, to the quiet and sentimental - this is music that will move the listener, and take them on a musical journey. Award winning composer and conductor Christopher Tyler Nickel is unique in today's musical landscape, having made a name for himself as a composer of concert, film and television, and also classical-crossover/new age music. Chris' unique musical voice is the combination of strikingly beautiful melodies, powerful orchestrations, and a careful fusion of different styles of music as well as acoustic and electronic instrumentation. He blends his distinctive musical voice into these three rather different worlds, always keeping a focus on telling a story through his music. Chris graduated from the University of British Columbia School of Music with a degree in composition. Upon graduation, he continued his studies in both New York and Los Angeles. Prior to university, Chris' talent and passion for music became evident when he took up both the piano and the oboe. Throughout high school and university, he performed, toured and recorded with many ensembles including the Pacific Symphonic Wind Ensemble, the Vancouver Youth Symphony, the Royal City Musical Theatre Company, The BC Sinfonietta, the New Westminster Symphony and the West Coast Symphony Orchestra. As a concert music composer, Chris' works have been performed by orchestras and chamber ensembles in Canada, the United States, and Europe. His music has been heard on the radio in both Canada and the United States, and in 2002 the Northeastern Pennsylvania Philharmonic performed his "Fanfare for Freedom" which was broadcast live on the U.S. east coast for their July 4th celebrations. Recent premiers include his concerto for piccolo/flute/alto flute written especially for Sarah Jackson - piccolo of the Los Angeles Philharmonic. This epic 45-minute concerto was premiered by the Sinfonia Orchestra of the North Shore under the baton of Clyde Mitchell. Other ensembles having performed Chris' works include the Vancouver Symphony Orchestra, Northeastern Pennsylvania Philharmonic, Vancouver Youth Symphony, Fraser Valley Symphony, North Shore Sinfonia, and the Kwantlen University Wind Ensemble to name a few. In both 2002 and 2003, Chris composed music for the very popular "Bard on the Beach" Shakespeare Festival Concerts in Vancouver, working with renowned actor/director Christopher Gaze. In the world of film and television music, Chris has worked on productions from Canada, the United States, and Japan for clients that include the Sci-Fi Channel, Alliance Atlantis Television, the National Film Board or Canada, Vision TV, the Discovery Channel, and the History Channel. His music can be heard in movies of the week, television series, DVDs, shorts, trailers, and documentaries. His awards include the 2004 Gold Metal for Best Action Score at the Park City Film Music Festival, the 2002 Golden Key International Performing Arts Award for Musical Composition, and a Leo Award Nomination in the category of Best Score - Feature Length Drama. Chris' orchestrations can also be heard in numerous television series and video games. Recently, he worked with the Hollywood Studio Symphony at Paramount Studios on the award-winning score for the video game "Advent Rising" for composers Tommy Tallarico and Michael Richard Plowman. His orchestrations can also be heard in the popular television series "The Collector", the animated series "Class of the Titans", and the documentary series "Mars Rising" and "The Real Lost World". Also an active conductor, Chris has worked with many ensembles, including conducting and recording his music with members of the New York Philharmonic (NYU 2001), the UBC Symphonic Wind Ensemble, the West Coast Symphony, the UBC Symphony, and the Northwest Sinfonia. In the winter of 2006, Chris traveled to the Czech Republic to record his first CD with the acclaimed City of Prague Philharmonic Orchestra and Chorus.

Here's what you say about
Christopher Tyler Nickel - Horizons.