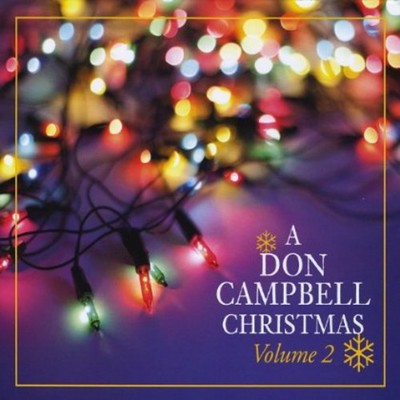 Maine singer-songwriter Don Campbell and the Don Campbell Band celebrate the holidays with a brand new Christmas music collection. Portland, ME - Singer-songwriter Don Campbell was happy to learn in 2009 that his first Christmas CD, A Don Campbell Christmas, was acknowledged by Down East magazine as one of it's all-time favorite holiday albums from Maine. While preparing to record his second holiday collection this year, Campbell decided to take much the same approach as he did on the first Christmas CD, namely including fans and band-mates in selecting Christmas song favorites to record; taking inspiration from personal Maine Christmas experiences for his original songs and arranging the album in a way that would allow his band to recreate the sound of the CD in a live performance setting. A Don Campbell Christmas, Volume 2 will be released Nov. 22, 2011, and will be celebrated at several Don Campbell Band Christmas concerts around New England. The CD will be available for sale at concerts and at Bull Moose music stores, as well as at the Band's website, at CD Baby and other online music retailers. Campbell's first Christmas CD is also on sale at these outlets, and includes 18 songs, 14 classics and 4 originals. In 2002, a survey of Campbell's fans generated several hundred responses, requesting over 100 different Christmas classics. "We knew immediately that our first Christmas CD would not be our last," said Campbell from his recording studio in Cape Elizabeth. A recent survey of fans helped determine which songs to place on volume two, along with live "road-testing" of tunes at Don Campbell Band's Christmas concerts last year. They include the top vote-getter, "Little Drummer Boy," and band- and family-favorites such as "Sleigh Ride," "The Christmas Song," "Santa Claus is Coming to Town," "Mary's Boy Child," "It's the Most Wonderful Time of the Year," and more. Another notable addition is a rendition of Dan Fogelberg's "Same Old Lang Syne." The new Don Campbell Christmas, Volume 2 features two original songs penned by Campbell, both with deep Maine roots. "The Snow at Arlington" is inspired by the Wreaths Across America organization's escort of Maine-made wreaths to Arlington National Cemetery each Christmas season. Campbell has provided live music at escort stops in Maine in the past, and this year he will visit Arlington Cemetery and lay wreaths on the graves of the fallen on December 10. "Christmas Lights" was the last song to be added to the album. "When I was a kid, our family would jump in the car and drive around Greater Portland to show the lights to my little sister. I was thinking about that late one October night in my studio." Six hours later, Campbell woke up with a song in his head. Later that day, "Christmas Lights" was complete - written and recorded - a welcome surprise of Christmas magic. On this feel-good holiday collection, Campbell provides lead and harmony vocals, acoustic and bass guitars and piano, and is joined by band-mates Andy Happel (violin and harmony vocals), Sumner McKane (electric guitar) and Sean Daniels (percussion). The graphic design for the album is by Campbell's brother-in-law, Maine native and NYC artist, Peter Shevenell. The Don Campbell Band, which also includes Campbell's wife, bass player Tonya Shevenell, will perform songs from both Christmas CDs at it's upcoming holiday shows. Performing over 200 shows per year between his band, trio and duo ensembles, Campbell splits his time between home studios in Cape Elizabeth and Nashville, TN. As soon as the holiday season winds down, he and his band-mates will be back in the studio to complete work on two other projects already in progress, a new original music CD and a Dan Fogelberg tribute CD, both to be released in early summer 2012. For additional information, photo and interview requests, please contact Tonya Shevenell 207-332-1261 or [email protected]

Here's what you say about
Don Campbell - Christmas 2.