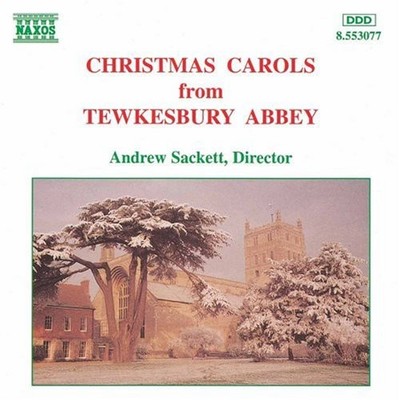 Traditionally carols were not necessarily confined to the Christmas season, but were dance-songs. The dancers of Kölbigk, indeed, found themselves in difficulties with the Church, condemned by an angry priest to dance for a whole year, as a punishment for their neglect of religious duties, carolling at an inappropriate time in the churchyard. Nevertheless, even in the Middle Ages, there were carols specifically for Christmas, the season with which nowadays these songs are most closely associated. It has become the fashion to use very considerable technical and musical skill in the arrangement of essentially simple and popular music for the kind of sophisticated performance to be found in the major English choral foundations, and on these arrangements composers annually use much ingenuity and artifice. The Tewkesbury Abbey carols open with The first Nowell, in an arrangement by Sir David Willcocks, a musician well known for his long association with King's College, Cambridge, and it's choir, and with the London Bach Choir. The series continues with another David Willcocks arrangement, this time of an old Basque carol, with well known words by S. Baring-Gould, Gabriel's Message. Other fine arrangements by David Willcocks include a version of the popular While shepherds watched their flocks, from Thomas East's 1592 publication, The Whole Booke of Psalmes with their Wonted Tunes, as they are sung in Churches. The Polish carol Infant holy, infant lowly is included, with the fifteenth century French Franciscan processional Come, o come Emmanuel. Two other French carols arranged by David Willcocks are Angels from the realms of glory and Quelle est cette odeur agréable? (Whence is that goodly fragrance flowings?), the latter sung here in French. A final arrangement by David Willcocks in the present collection is of the traditional English watchman's song God rest ye merry, gentlemen.

Here's what you say about
Various Artists - Christmas Carols from Tewkesbury Abbey / Various.