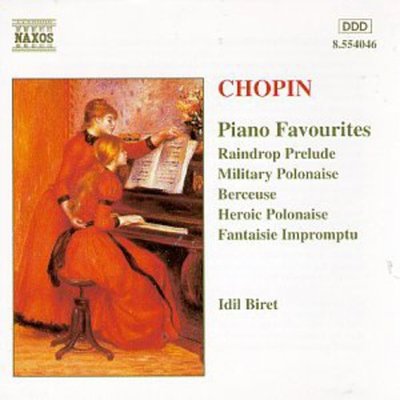 The greater part of Chopin's music was written for his own instrument, the piano. At first it seemed that works for piano and orchestra would be a necessary part of his stock-in-trade, but the position he found for himself in Paris enabled him to write principally for the piano alone, in a characteristic idiom that derives some inspiration from contemporary Italian opera, much from the music of Poland, and still more from his own adventurous approach to harmony and his own sheer technical ability as a player. Of the forms that Chopin used, the romantic Impromptu offered a particular freedom, with it's suggestion of music dashed off in some fine, careless rapture. His Fantaisie-Impromptu was written in 1835, but published posthumously. It was followed by three further works under the same generic title. The Mazurka, a Polish dance, provided Chopin with a basic rhythmic pattern, his first attempt made in childhood at the age of ten and his last in the year of his death. The form became one with which he was particularly closely associated, an expression of his patriotism. Writers had started to show an interest in the traditional ballad with the publication by Bishop Percy of his Reliques of Ancient English Poetry, which first appeared in the 1760s. The work of Sir Walter Scott as a collector and as a poet added to the enthusiasm. In Germany further interest was shown, with the publication of translations of ballads and the creation of new ones, first by Bürger and then by Goethe and Schiller. This literary form, reflected in ballad settings by Schubert, Loewe and others, led Chopin to a purely instrumental form, based, it has been suggested, on poems by Mickiewicz, contemporary ballads of Polish patriotic purport. The first of Chopin's four Ballades implies a narrative content, opening with the words of the story-teller and proceeding to events of greater excitement.Chopin completed his collection of Preludes in 1839, when he published a set of 24, using all major and minor keys. A number of the Preludes were written during his winter in Mallorca with George Sand and her two children. They had arrived on the island in November, their appearance arousing some suspicions in the minds of local people. Deterioration in the weather aggravated the weakness of Chopin's health and doctors diagnosed tuberculosis. Forced to leave their lodgings and to pay for their fumigation, the party moved to rooms in the deserted monastery at Valldemosa, where George Sand continued to nurse him, in spite of considerable local hostility towards this woman who smoked cigars, the two long-haired boys and a girl who dressed as a man. It was with some relief that they left Mallorca in February, happy to return to France. It was in these circumstances, graphically described by George Sand in her Hiver à Majorque, that the Preludes were completed and revised, before being dispatched to Camille Pleyel for publication, each one a musical vignette. The second of Chopin's three sonatas includes, as a slow movement, his famous Funeral March, written in 1837, while the second of his four scherzos, the Scherzo in B flat minor, was written in the same key and same year. Originally a musical joke, with Beethoven a relatively jocular symphonic movement that replaced the traditional minuet as a bridge between a slow movement and a final symphonic rondo, the scherzo, for Chopin, became an extended and independent composition, here passionate in it's content. His single Berceuse, completed in 1844, makes much more than might be expected from the lullaby of the title. The Polish dance, the Polonaise, found it's way from village to ball-room and thence abroad. In Paris in 1830 Poland was in the news, with the attempted rising against Russia and it's suppression, and things Polish enjoyed considerable popularity, a fact from which Chopin benefited on his arrival in the city. As with other relatively trivial dance forms, he was able to raise the Polonaise to a new level, imparting a degree of complexity and a degree of feeling that had not always been present in the work of his elders in Warsaw. Chopin's first attempts at the form were at the age of seven and his last in 1846, three years before his death, and there is a clear element of patriotism about the two Polonaises included in the present collection, the Military and the Heroic.

Here's what you say about
Chopin - Piano Favourites.